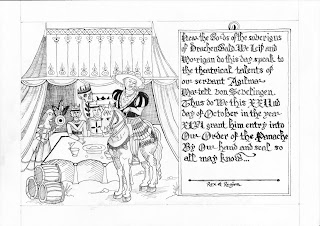 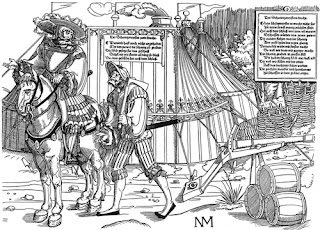 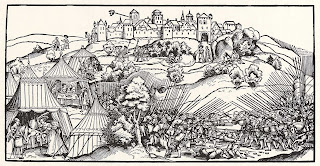 Another landsknecty scroll!  Written in Gothic Bastarde, because I felt that most closely matched the tiny writing in the exemplar itself.  These sources (that I know nothing of exept that I have them in my possession) were sent to me when I asked Baron Gottfried about Landsknect Camp Life and how the troops were entertained.  I sort of cobbled it together after that to make it appropriate for Agilmar. 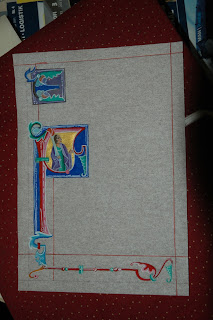 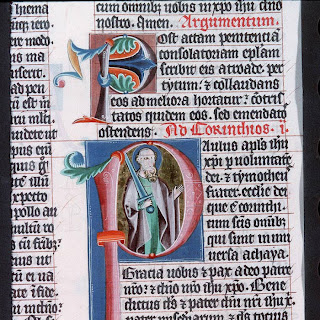 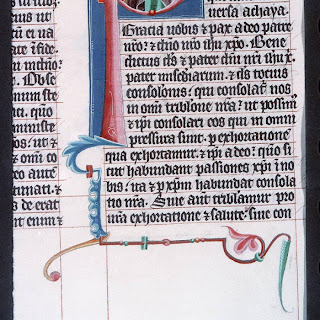 A blank that I gave to Ary to write.  I was not so confident in my ability to write that small at the point in time that I gave it to her, and she loves teeeeeny letters so, everyone is happy.  Codex Claustroneoburgensis 3, 317f 271r 14th century. 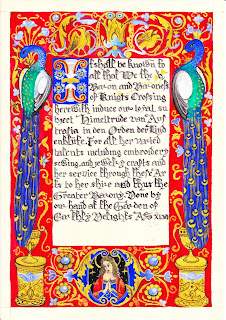 I wasn't sure about posting this scroll.  It should have llamas and not peacocks in it for all the drama it caused when it was given.  But...It is a valid example of my work so therefore I will not completely trash the idea that I made it.    From the Sforza Hours: Hours of the Virgin fol 54 r.  The hand is also a Gothic Bastarde.
Posted by Saraswati at 11:18 AM