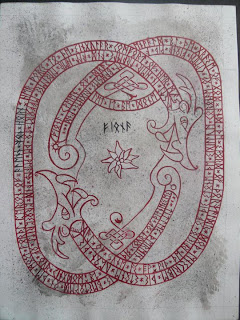 A Sigellum Reginae that I did for Fiona's Reign.  I have to list this as one of the highlights in my scrollmaking career because she said that she didn't want to give it away, and wanted to keep it for herself because that's JUST how cool it was.
I wrote it in  Elder Futhark substituting more modern runes for the letters that I needed that I didn't have.
It reads starting from the tiny sun on the left tail and going around :  Fiona, queen of Drachenwald by the grace of God and the sword of Thorvaldr doth enscribe this stone upon the 19th day of June Anno Sociatatis 45. With the raising of this stone, the Sigillum Coronae of Queen Fiona with all badges rights and titles therein, is bestowed on the most worthy person of Alenn von Horn. For her works to the singular comfort of Her Majesty in her travels, and all her tireless effort to the wealth and prosperity of our Kingdom. By this court of witnesses, let it be done! 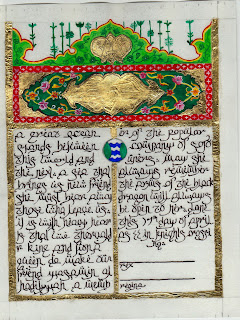 A PCS from a late period Quranic text.  It stuck out for me because it was one of the few that were done in shades of green rather than blue and gold.  It can be found in this gallery (I will be finding an exact link soon) http://www.flickr.com/photos/medmss/page1/ 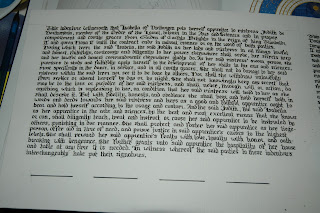 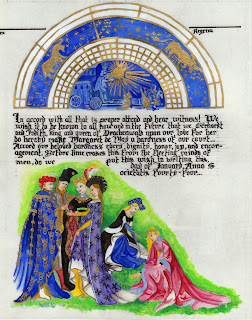