These are in no particular order.  When I have more energy I might put them in chronological order.  For now, they will just stay where the photoeditor uploaded them.
Having odd issues with the photouploader and it's placing of photographs, so I'm trying this entry again adding one photo at a time.Annoying but it does appear to be working. 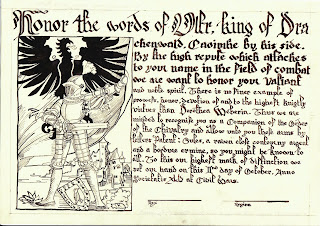 This was my first ever Peerage level scroll.  It is based on a 1554 woodcut by Jacob Köbel.  It is entirely done in India and Iron Gall ink on Pergamenata.  I am not sure if there was an error in it or not by way of the shield between the feet of the inked in person.  I saw in later photos of the elevation, that the bird was facing the other direction.  I was SURE that I had it going the right way.  Tittivilus. 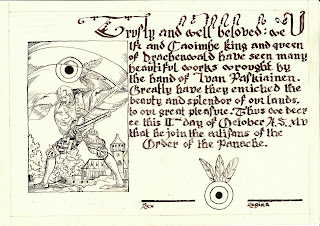 Another of the same Landsknect style, also from the Kobel woodcuts.  Done in  India ink and Iron Gall ink on Pergamenata. 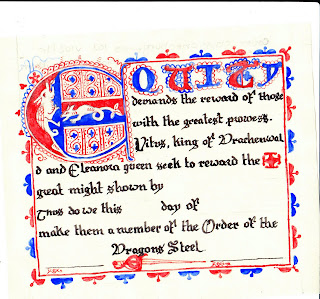 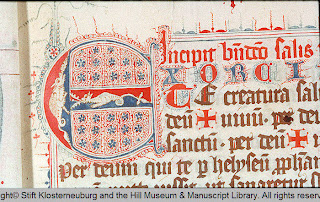 Aparently too large to go side by side.  I loved the beastie on this when I saw it.  It ended up going to Duarte if memory serves me.  Red ink and blue paint (because I didn't have blue ink at the time) on pergamenata and it is very small by my scale of working, only a 1/4 of a page.  Codex Claustroneoburgensis 1021 v102 f1r from the 15th century. 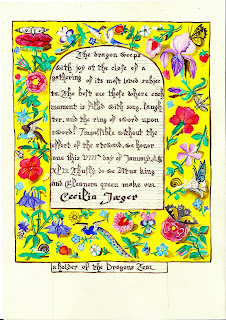 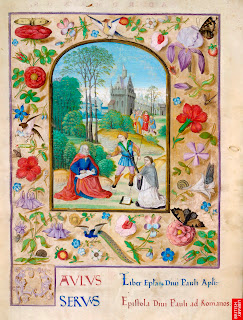 So this one comes from Pauline and Catholic Epistles in the Vulgate and Erasmian (Novum Instrumentum) versions ff. 1-311 circa  1509. Bit too much yellow, but all in all I think it turned out well.  Butterflies and Peacocks and Snails oh my! 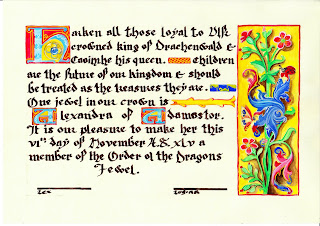 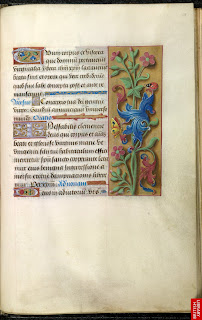 Another of similar style, because when I start a style I usually do 2 or 3 scrolls in that style before my attention span wanes and I must move on to something else.  Hours of Louis XII, Royal 2 D XL  f. 38 circa 1498. 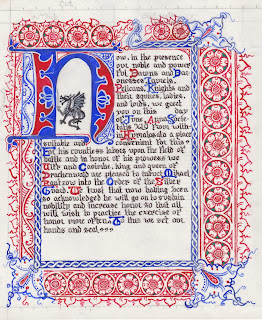 This one I am saddened to no longer have a reference for.  I am sure that I will find it eventually,though I would be eternally grateful for enyone who can perhaps enlighten me as to its origin. Red blue and Green Guache with drawing ink on Pergamenata. 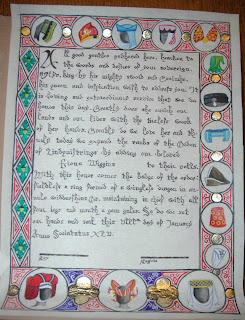 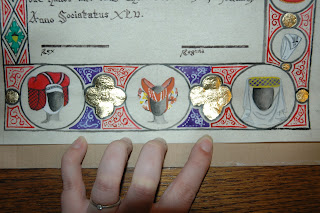 This one was for a dear friend.  I used a very damaged Italian exemplary (It looked like someone had poared coffee over the page which is a shame) that you could barely make out in the top row of circles a set of helmets, masks and filigree.  It only took a little scribe fu to switch the helmets with the hats that Fiona so joyfully makes and shares with the world.  Done in Guache and gold leaf, with drawing ink on pergamenata. 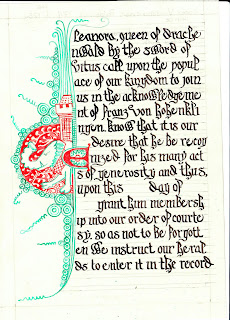 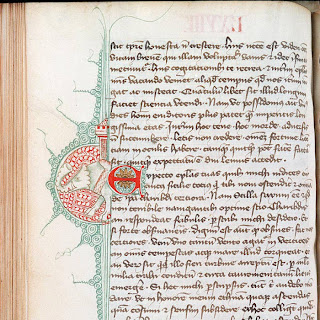 Elephants!  Can't do better than that.  I saw it in passing when looking for another Initial and I had to save it to come back to it.  Green guache and orange watercolor and India ink on Pergamenata.  Codex Vindobonensis Palatinus 174 166 f123v 14th century. 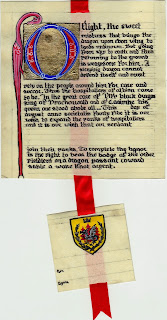 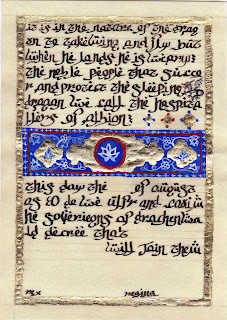 These two were a pair for Pennsic that I did rather at the last minute.   They are both Hospitallers of Albion.  The one on the Left, I have no idea where I got the initial. I know I have a source somewhere.  There was an ink disaster at the base of this scroll causing me to have to cut off the bottom.    The one on the right is another Quranic page from the http://www.flickr.com/photos/medmss/ 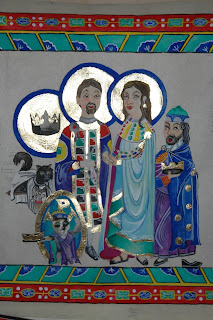 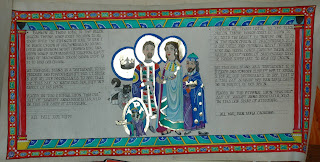 This is my largest scroll to date.  It was a combonation of two scrolls done on request from Ulfr and Caiomhe as they stepped down.  They asked that it be in the Byzantine style, from wall mosiacs in the Hagia Sophia.  It was also in the request that I portray their beloved kitties in a space of honor as advisors to their Former Majesties.    Guache, India ink, gold leaf and a lot of giggles.
Posted by Saraswati at 12:52 PM