I was asked, by the Knight of a dear friend if I would be willing and able to make for his Squire Robert Downey of Forfar a scroll befitting his elevation to the Knighthood.  This is the highest honor that you can grant me as a scribe, being chosen above all other scribes in the kingdom and even knowne worlde.  'Tis a heady feeling.  Making this scroll from start to finish was an act of purest joy.  For I can think of no-one more worthy of belt and chain than Robert, and he is truly an inspiration for all.

The research process was interesting for me because at first I tried to research something that would be period appropriate for Robert.  Finding a Scottish text that would do justice to the grandeur that this needed to have was impossible, so I fell once more to my books.  It was difficult for I found myself trying to capture everything that I know Robert IS in a scroll, and earthly pieces are lacking so much in character.  I narrowed it down to two, The Hours of Henry VII and the Neopolitan Luxury Bible (1390).  At this point I corresponded with Robert's Knight, Sir Bardolph, who made the choice of the Italian Bible, over the English Book of Hours.  Then the fun began.

TOTAL: 64.5 hours
MATERIALS:  Gouache, Composite Gold Leaf, India Ink.
I worked in stages around the edges, turning my table as I went along to make it easier to paint and work without having my arm across work I'd already done.

At about 42 hours into this scroll, I was involved in a fairly serious car accident. I was not injured, with the exception of some soft tissue damage to my lower back.  It left me unable to seat myself so the entirety of the finishing work of this scroll was done with me the scribe upon my knees in front of my table (which was incidentally at a perfect height to do this).  Wether this is dedication to the craft or sheerest folly I have not yet made up my mind.

Wording edited to SCA proper and legal by Master Cerian Cantwr but based upon the Grant of arms of John Alfrey, 1459/60

To all those who shall see or hear these present letters do we Cellach
otherwise called Dragon King of the Mid-Realm and Vukasin, Our Queen,
give greetings and all humble recommendation. Equity requires and reason
ordains that men virtuous and of noble courage be rewarded for their
merits by renown that they may be in all places of great honor
perpetually shining before others by certain signs and shows of honor
and gentility. That is to say of white belt and golden chain in order
that by their example others may the more endeavor to spend their days in feats of arm and other virtuous works to attain renown of ancient gentility. And therefore do We, who not only by common renown but also by the report and testimony of other nobles worthy of credence, are informed that truly Robert Downey of Forfar has deserved and is well worthy that henceforth may be known as a member of Our Order of the Chivalry.  And for the remembrance of this gentility assigned to the said Robert is the blazon ermine, a tower and on a chief embattled vert two fiddles fesswise necks to center argent to have and to hold for him for evermore. In witness whereof We have signed with Our hand and sealed these present letters. Made and given the nineteenth day of April in the year of
the society forty-eight while sitting on our thrones in our Marche of
the Unicorn. 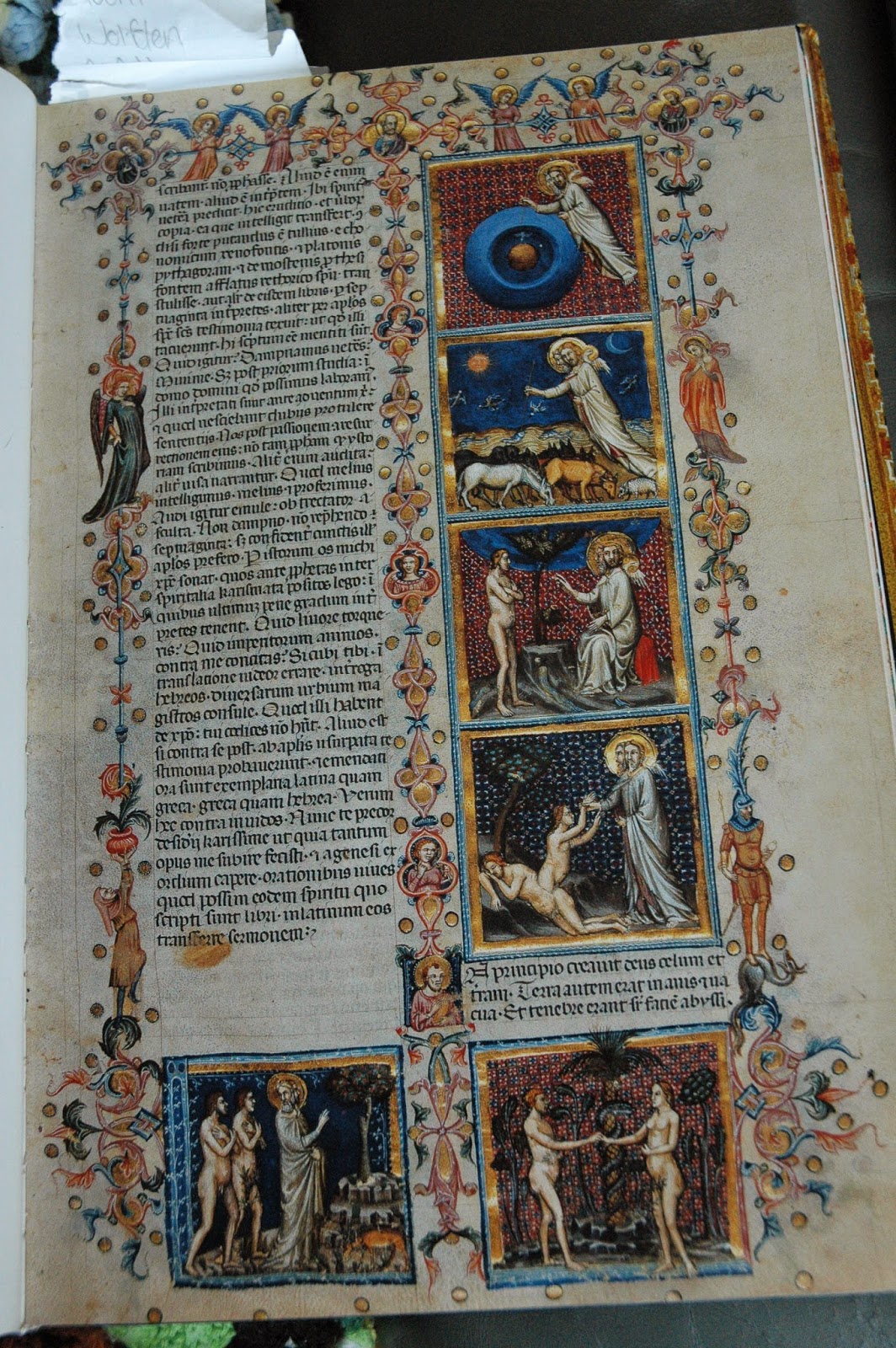 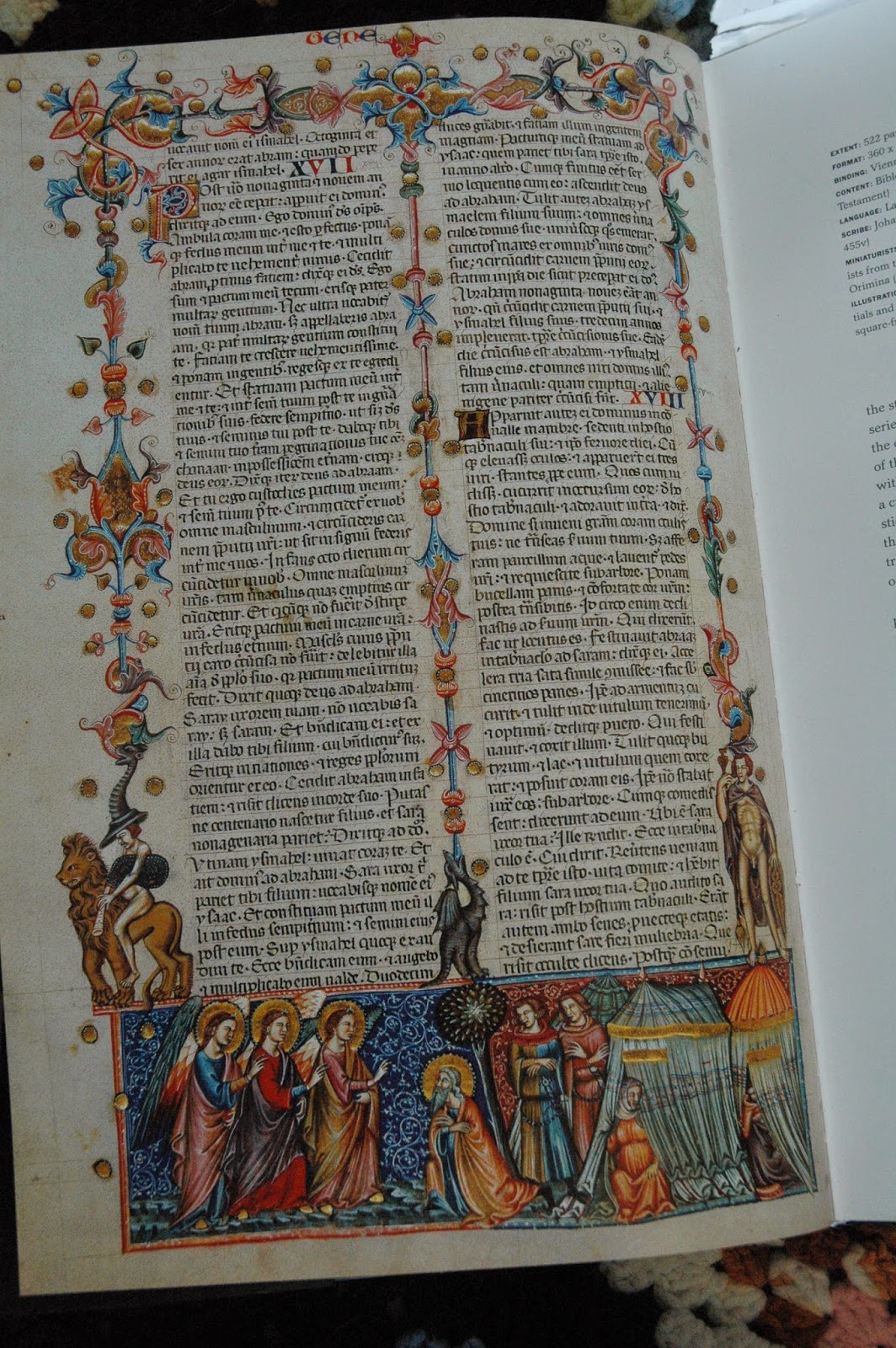 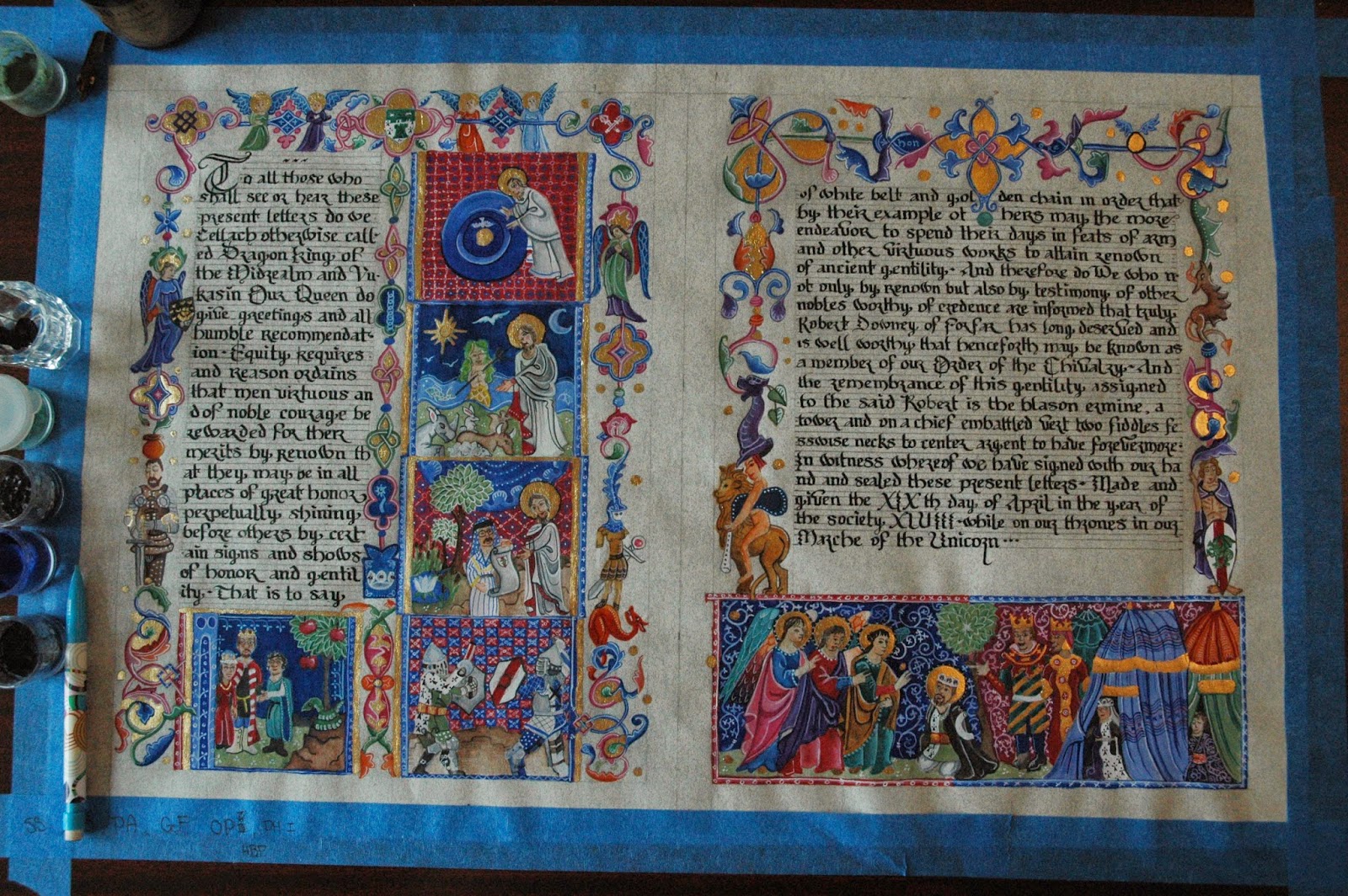 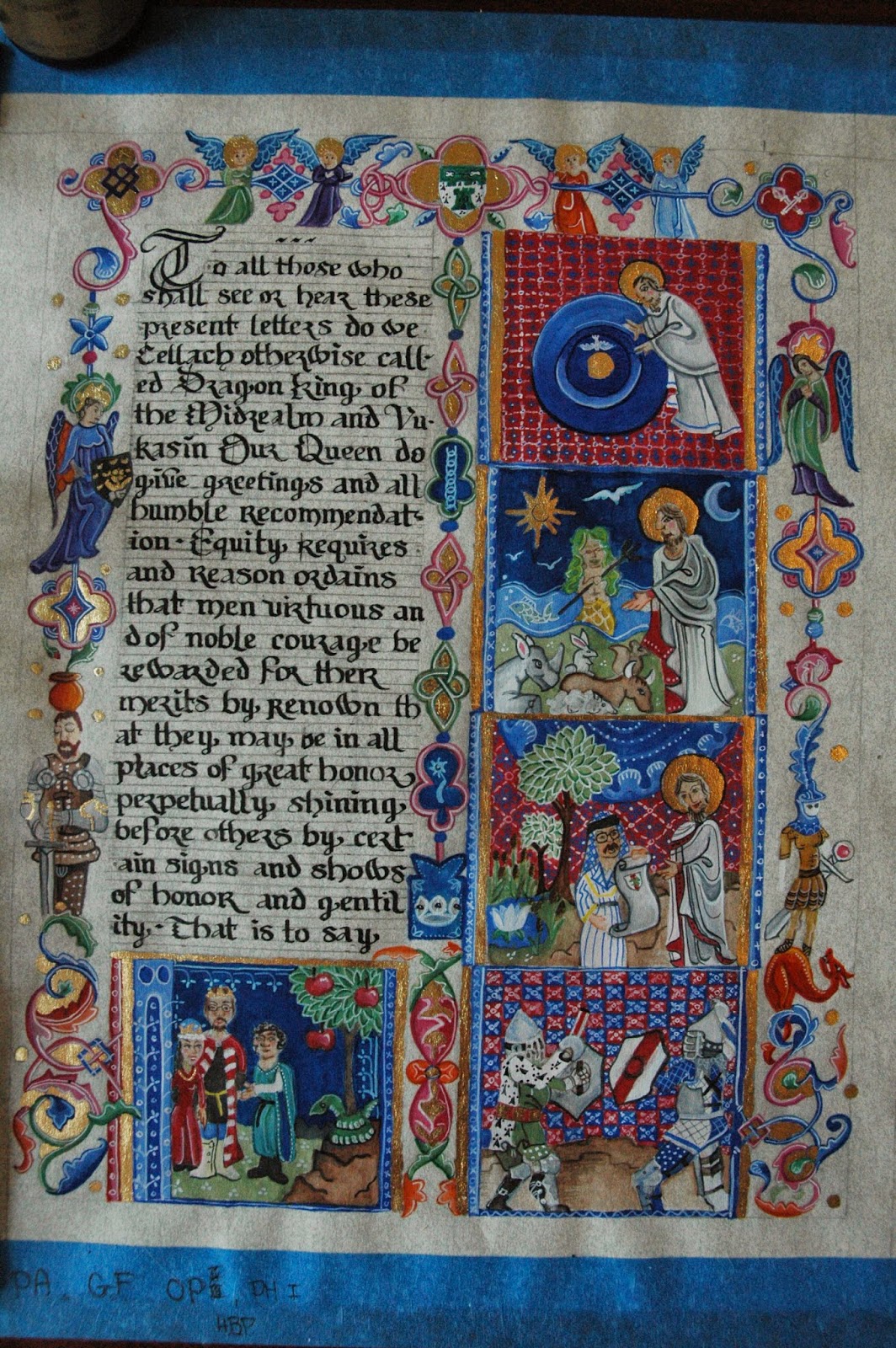 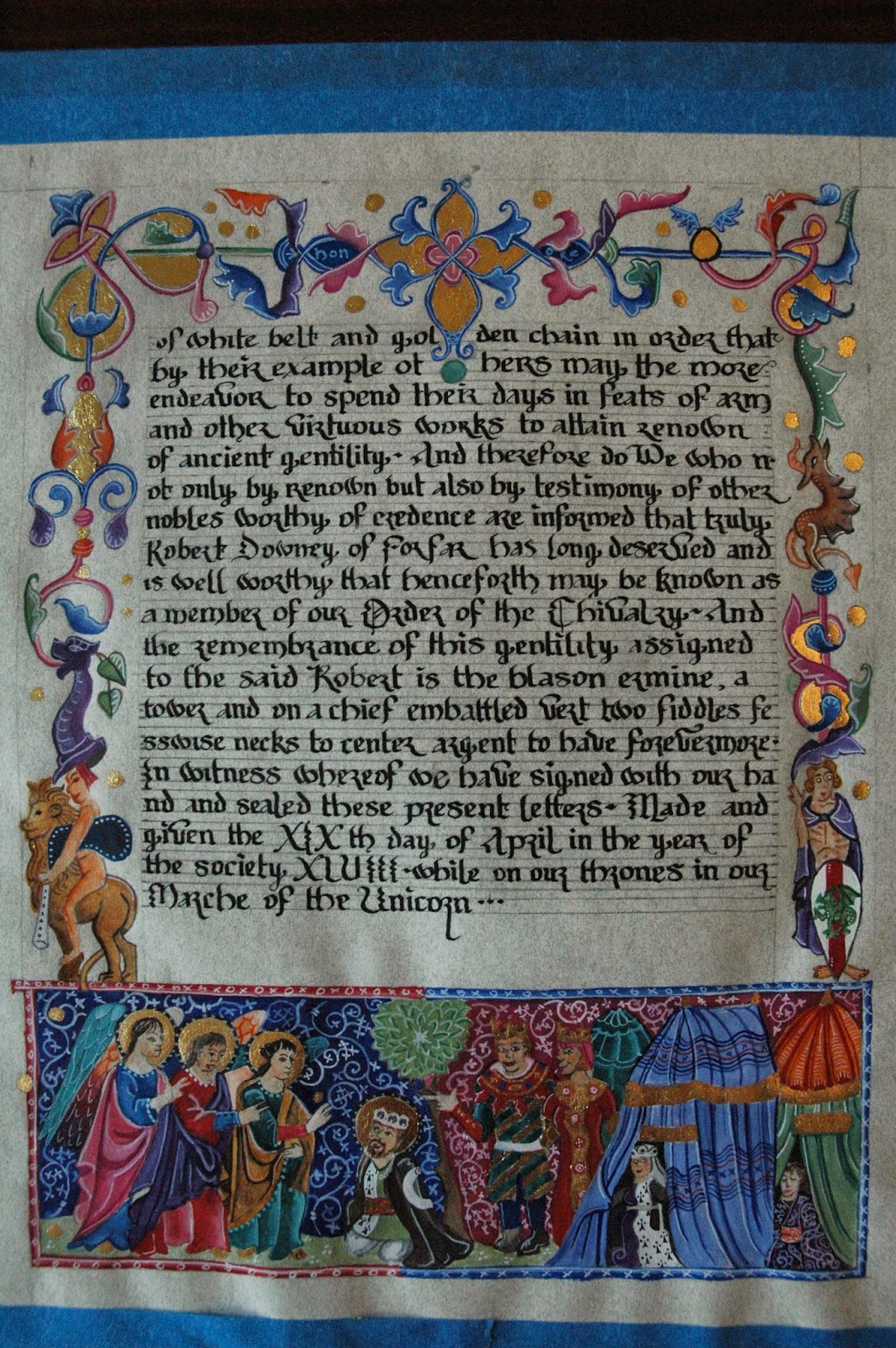 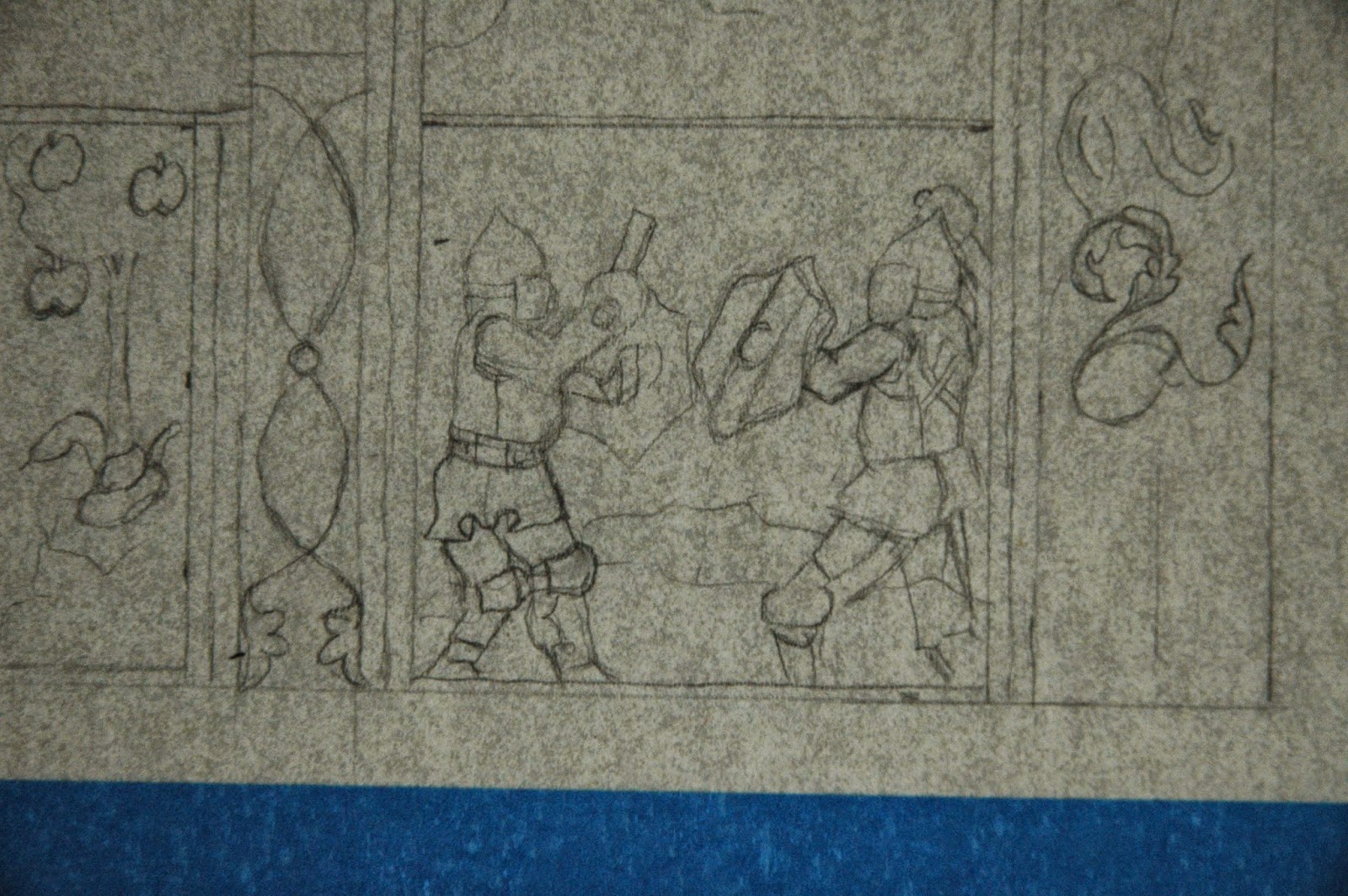 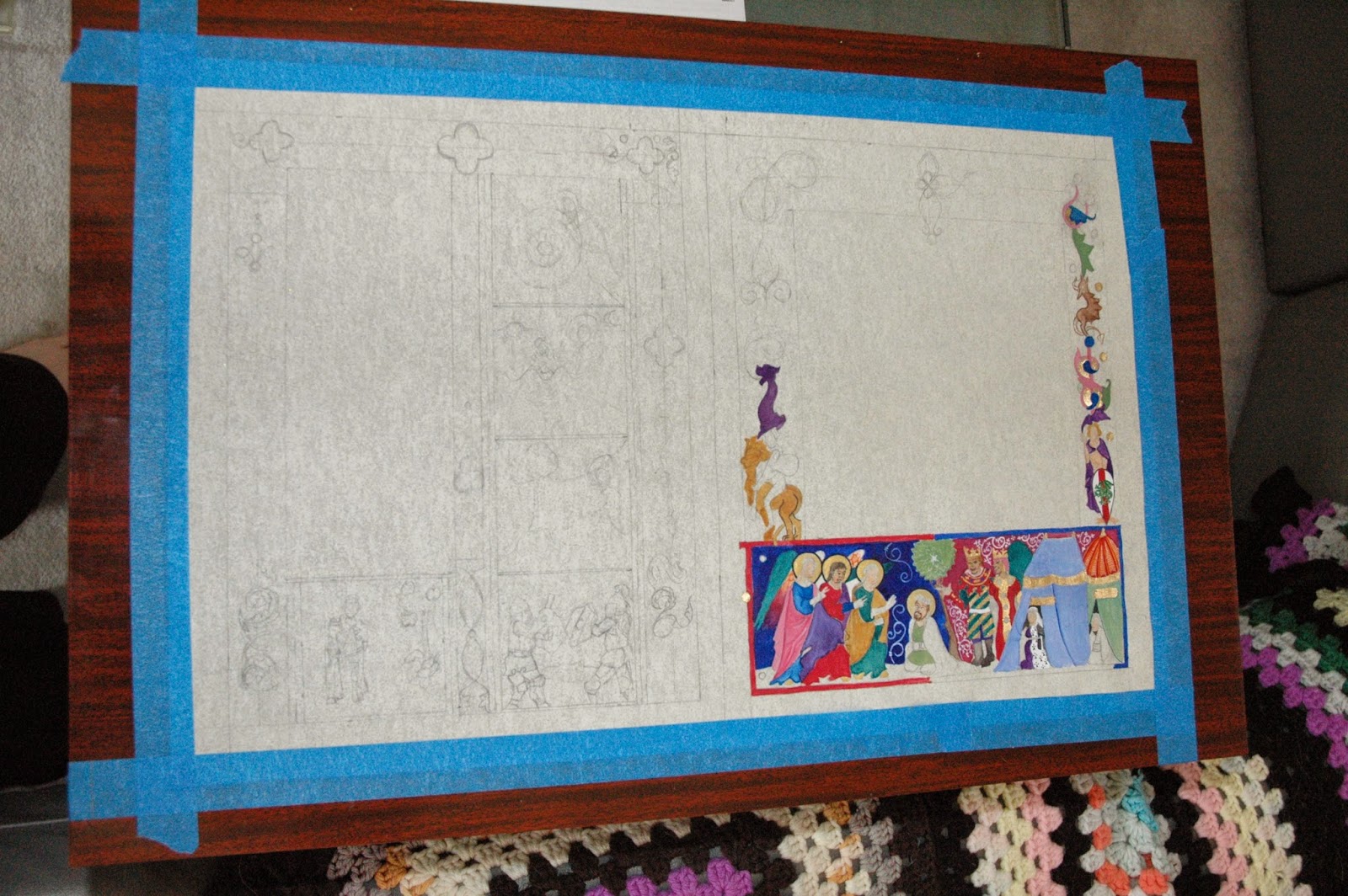 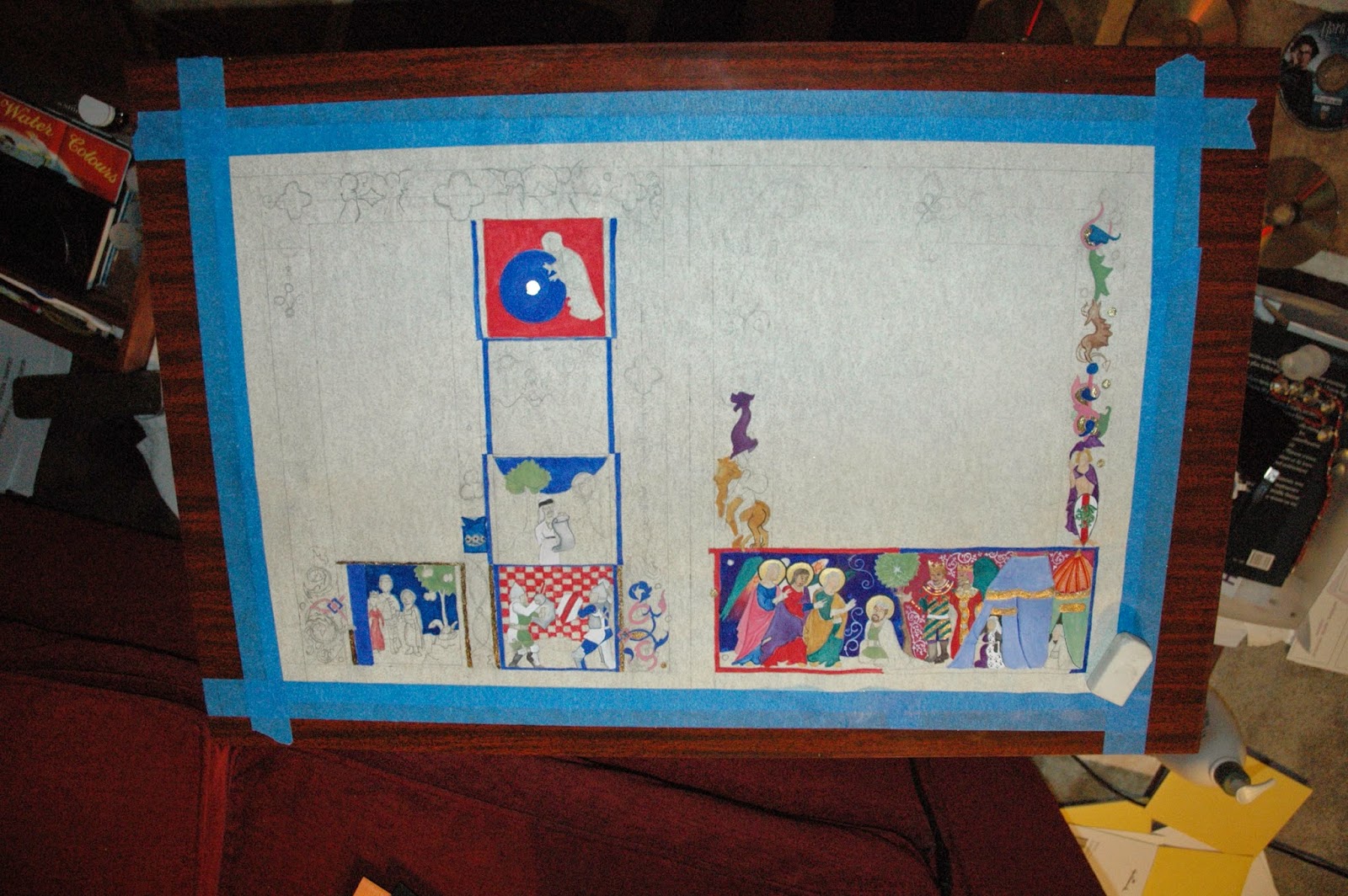 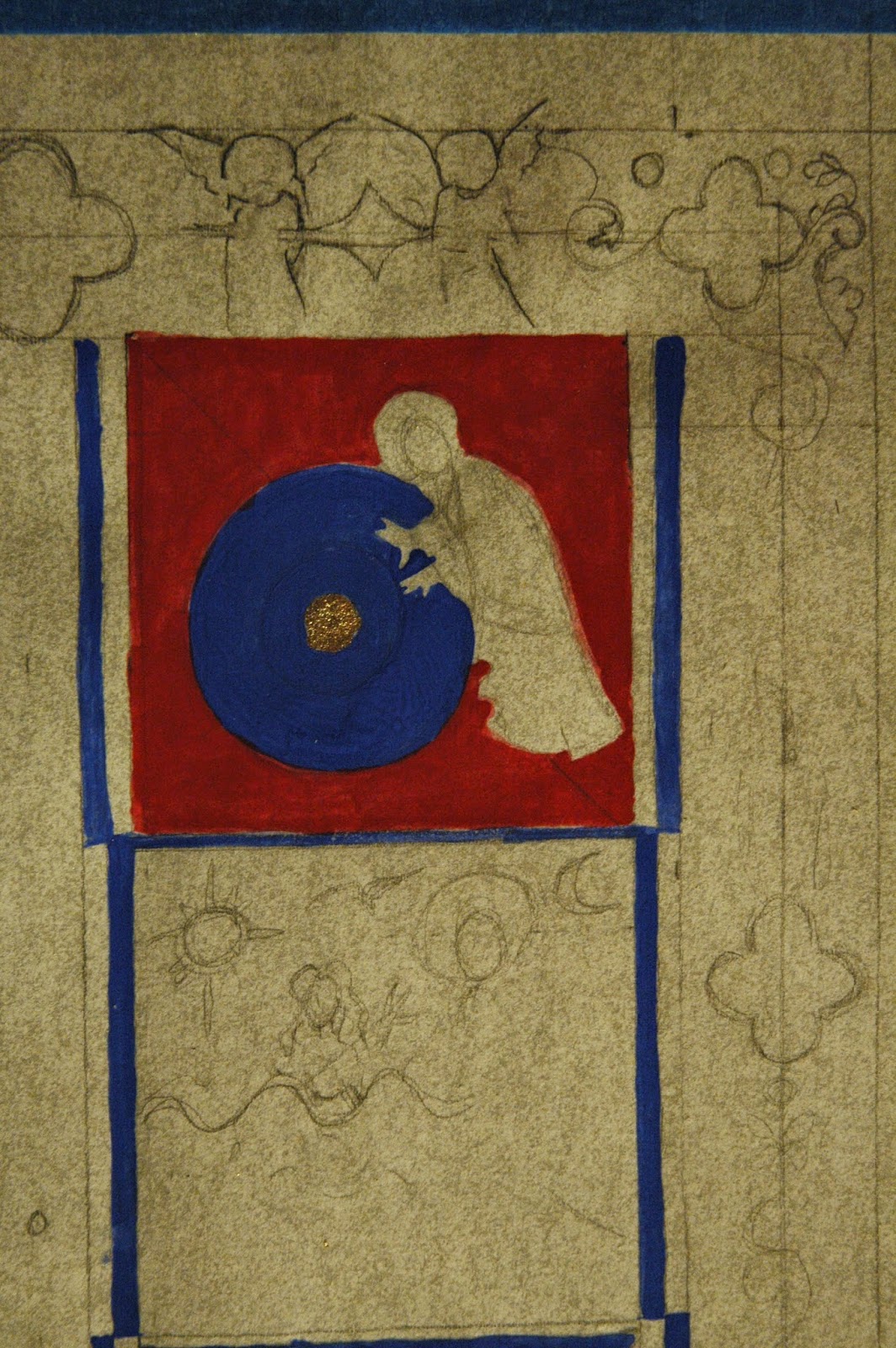 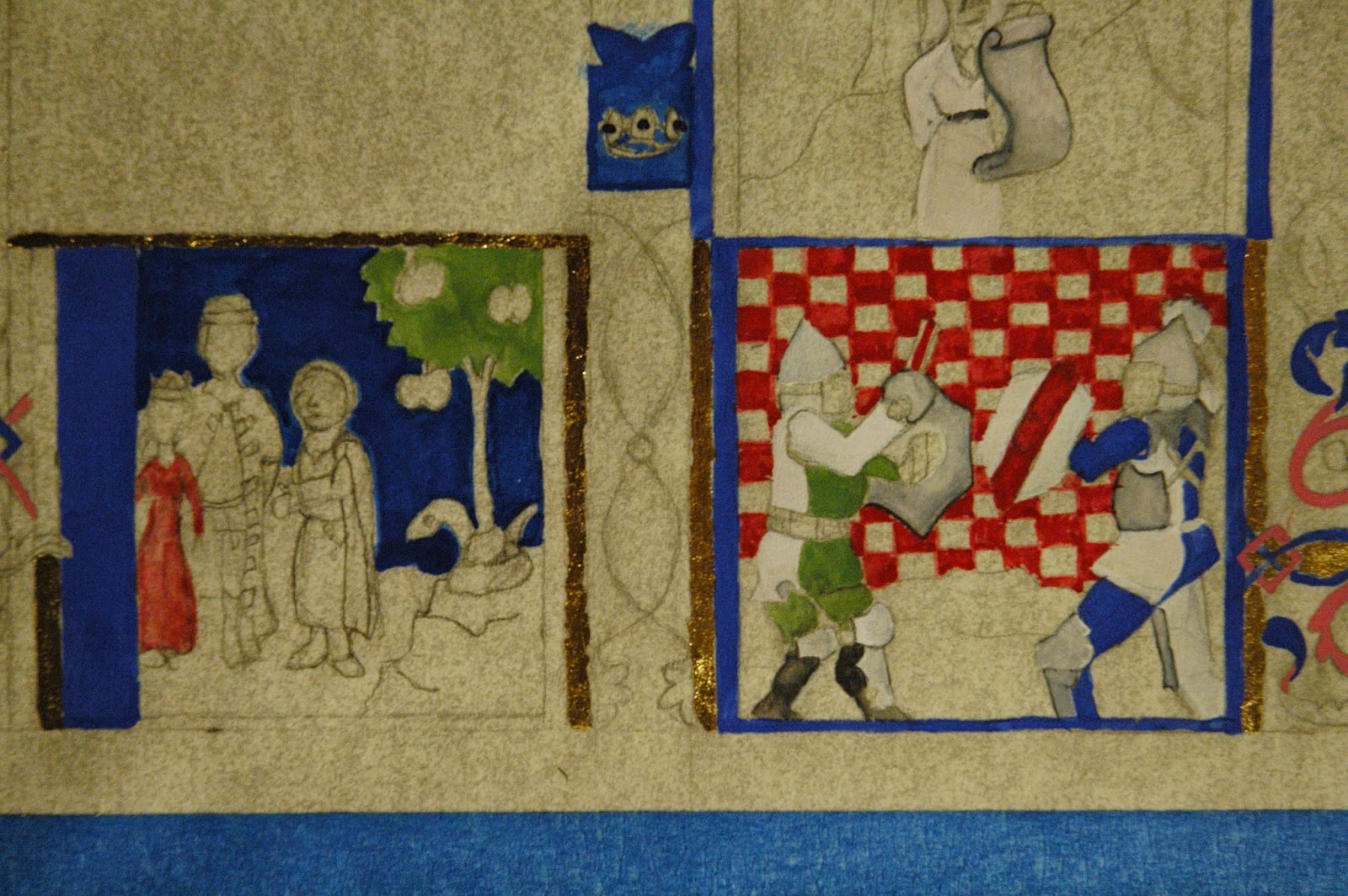 SIDE CRITTERS AND EXTREME CLOSEUPS: 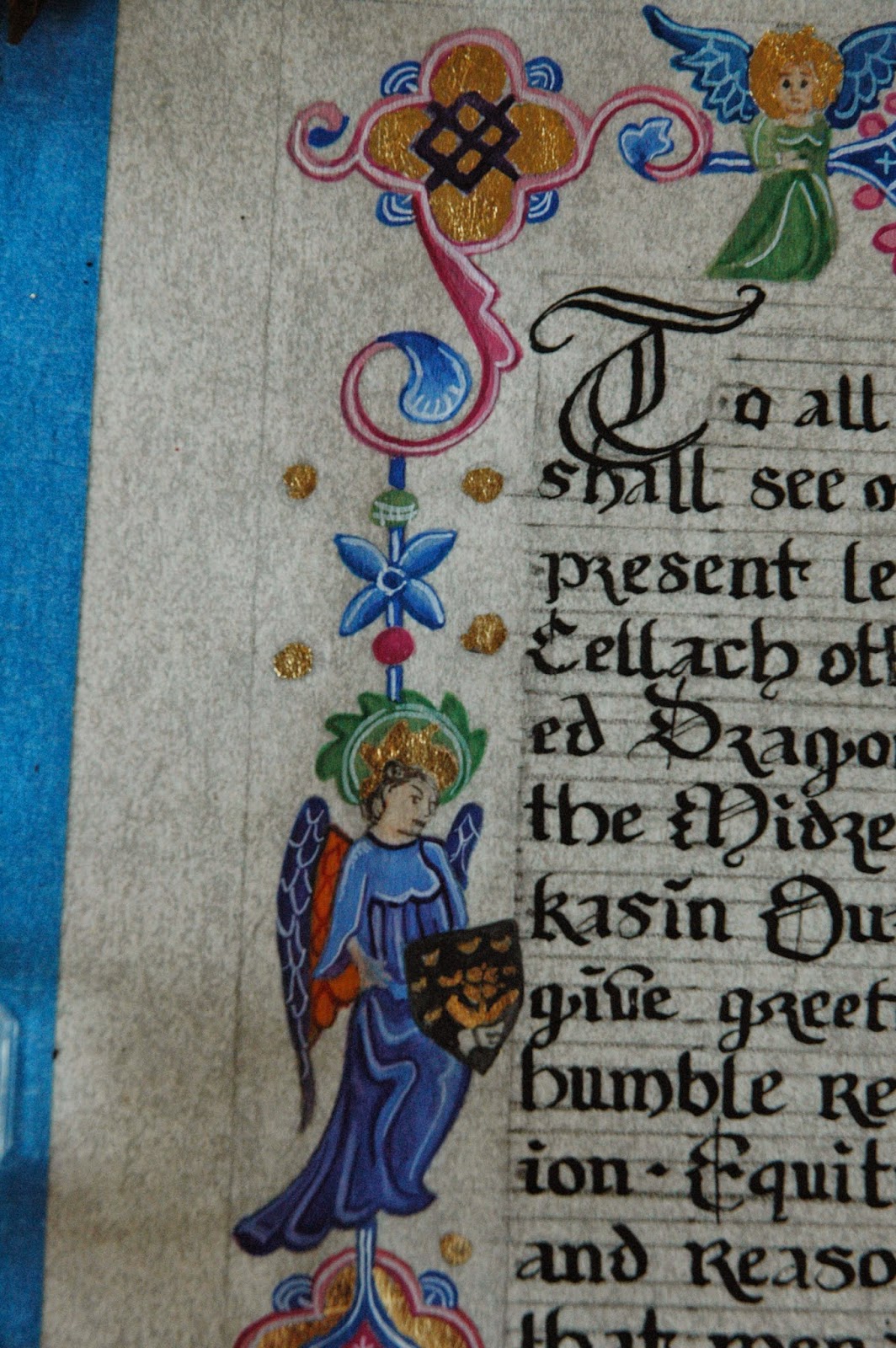 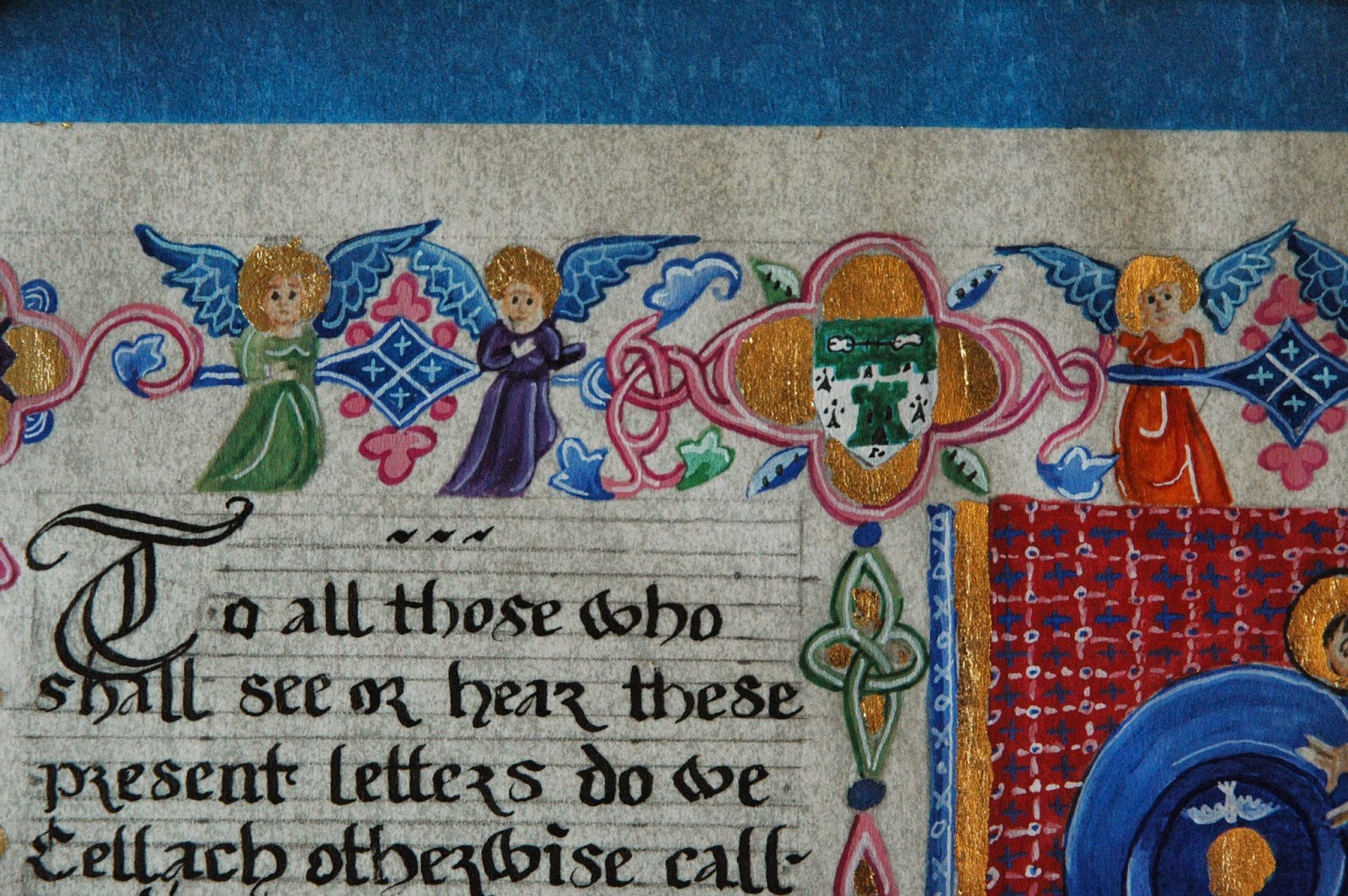 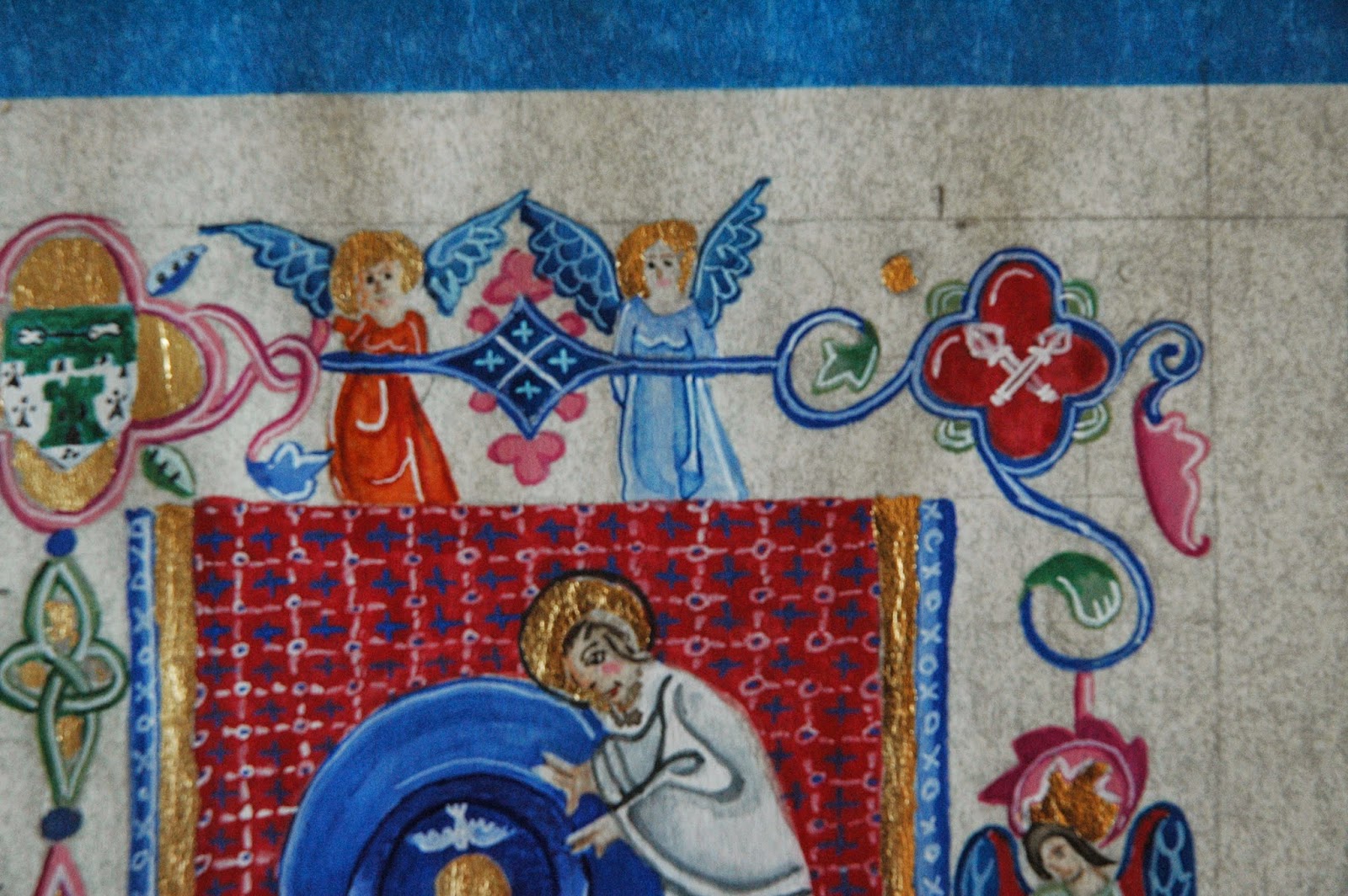 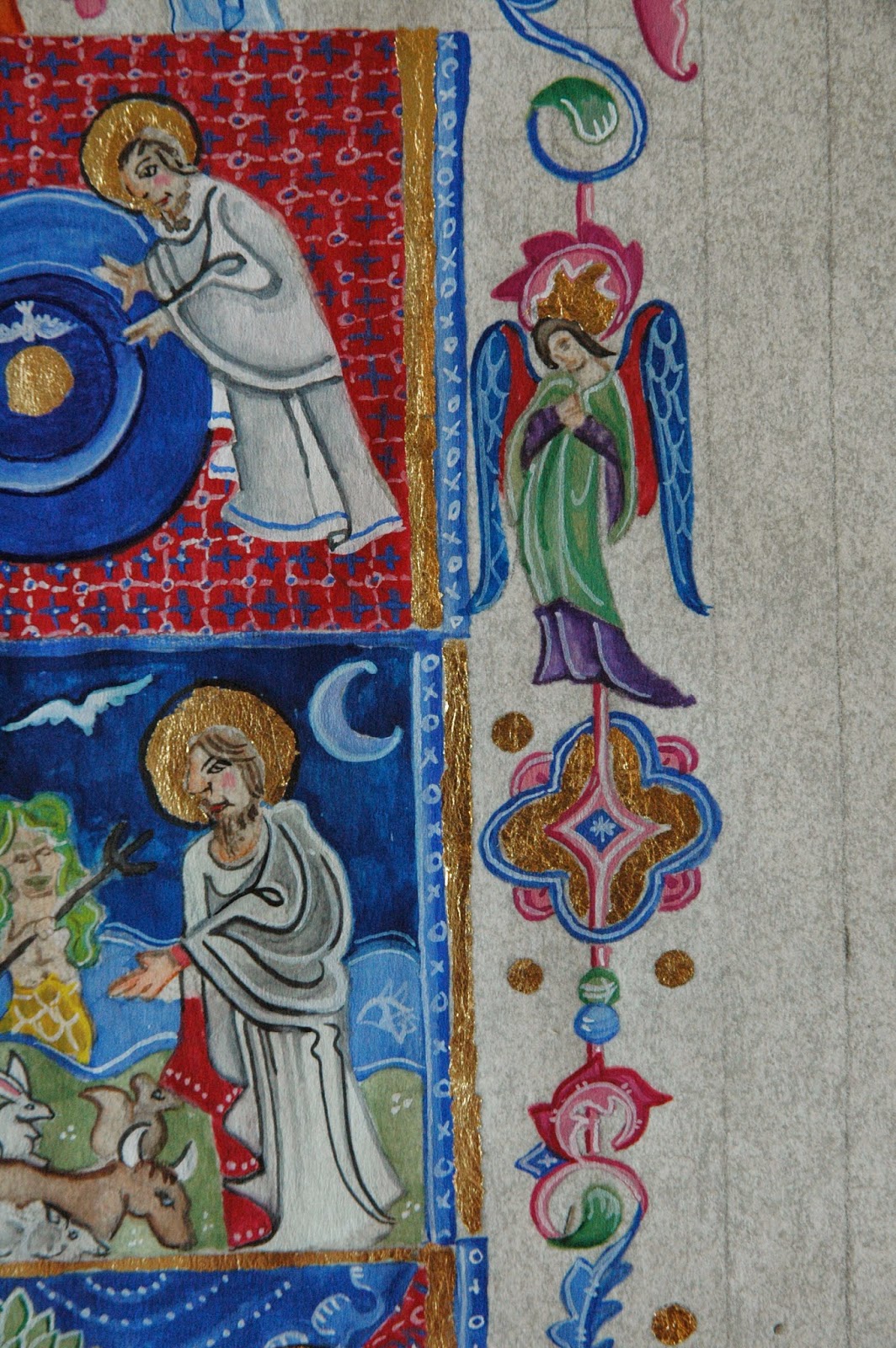 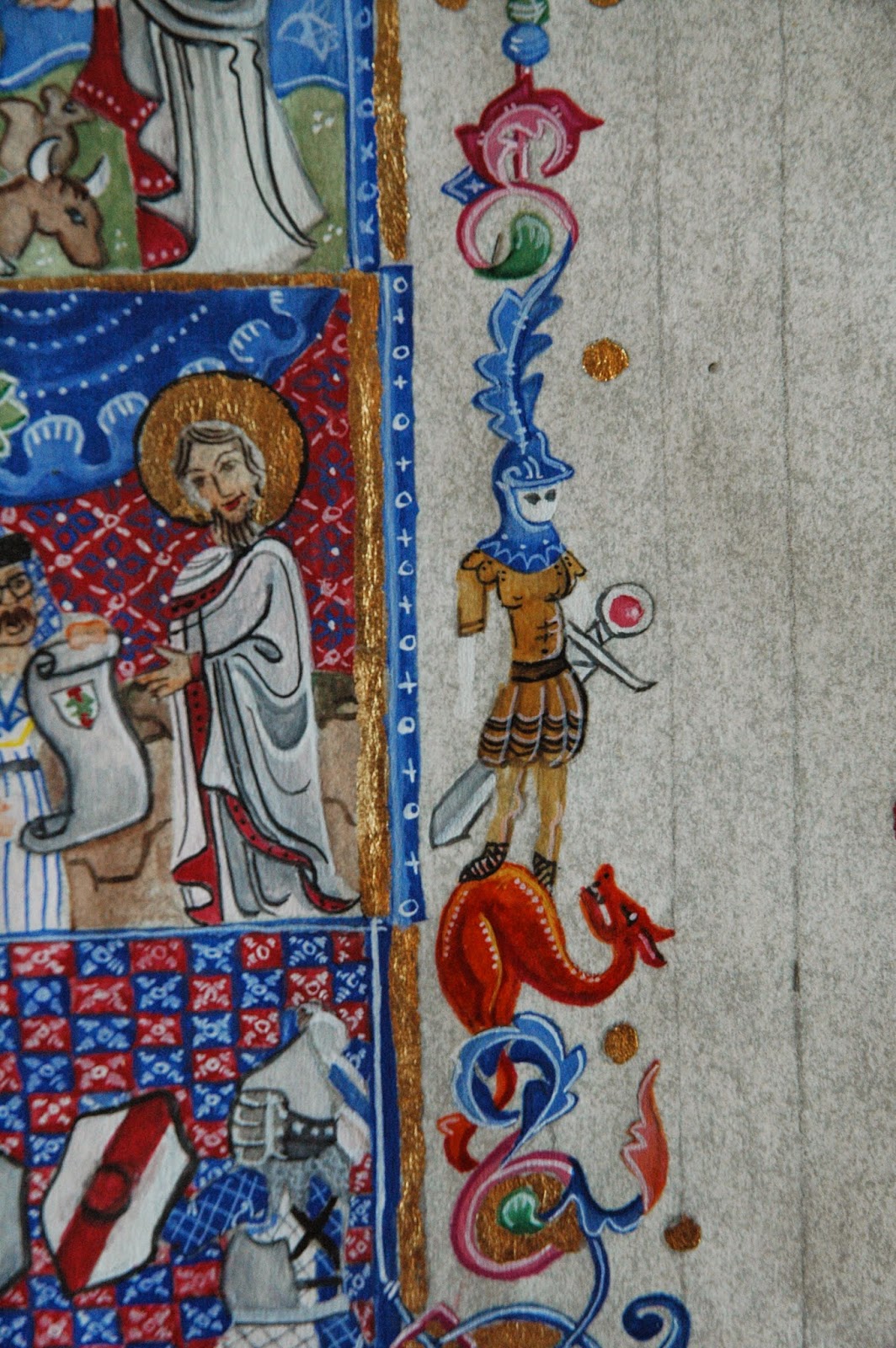 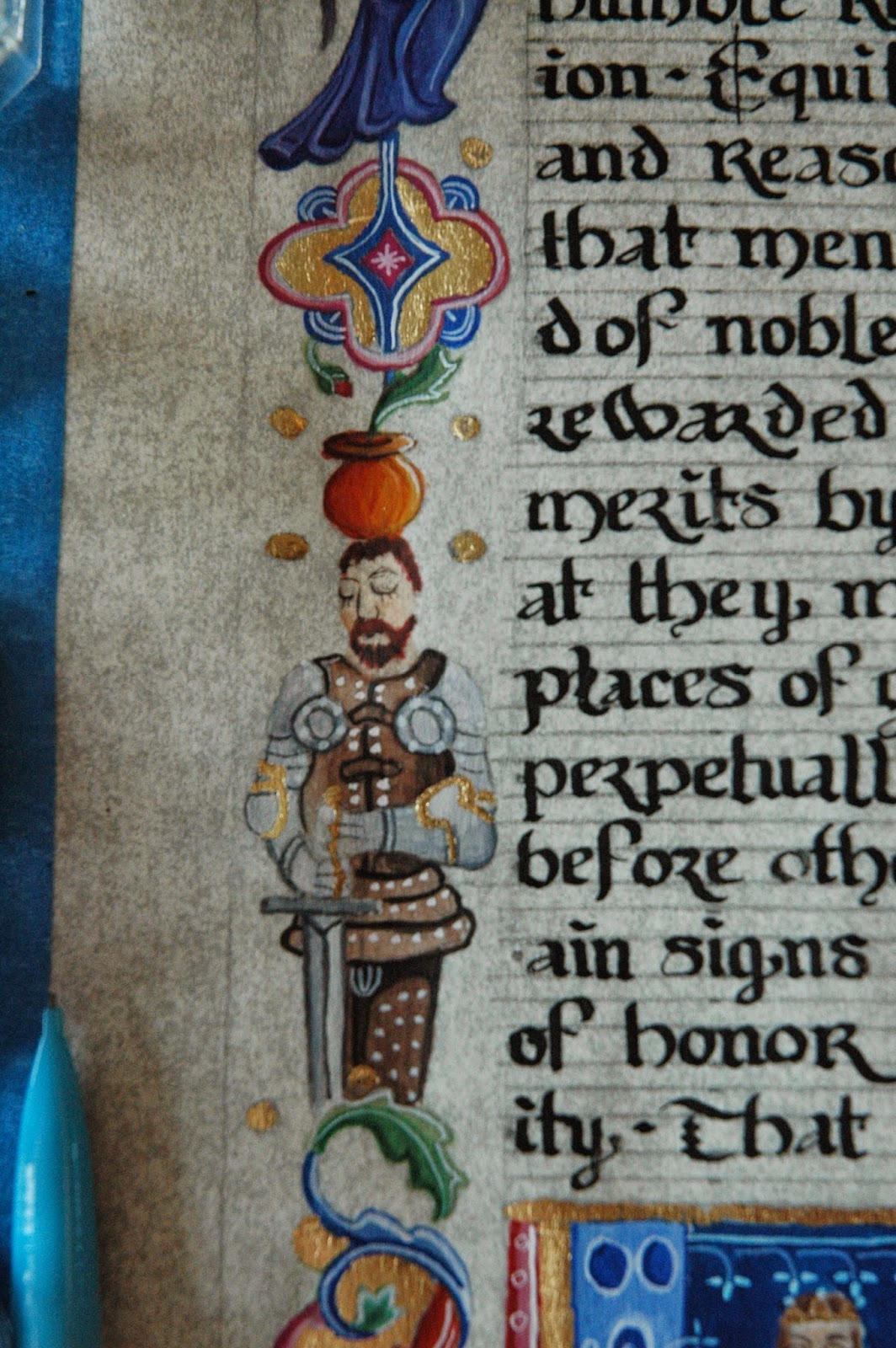 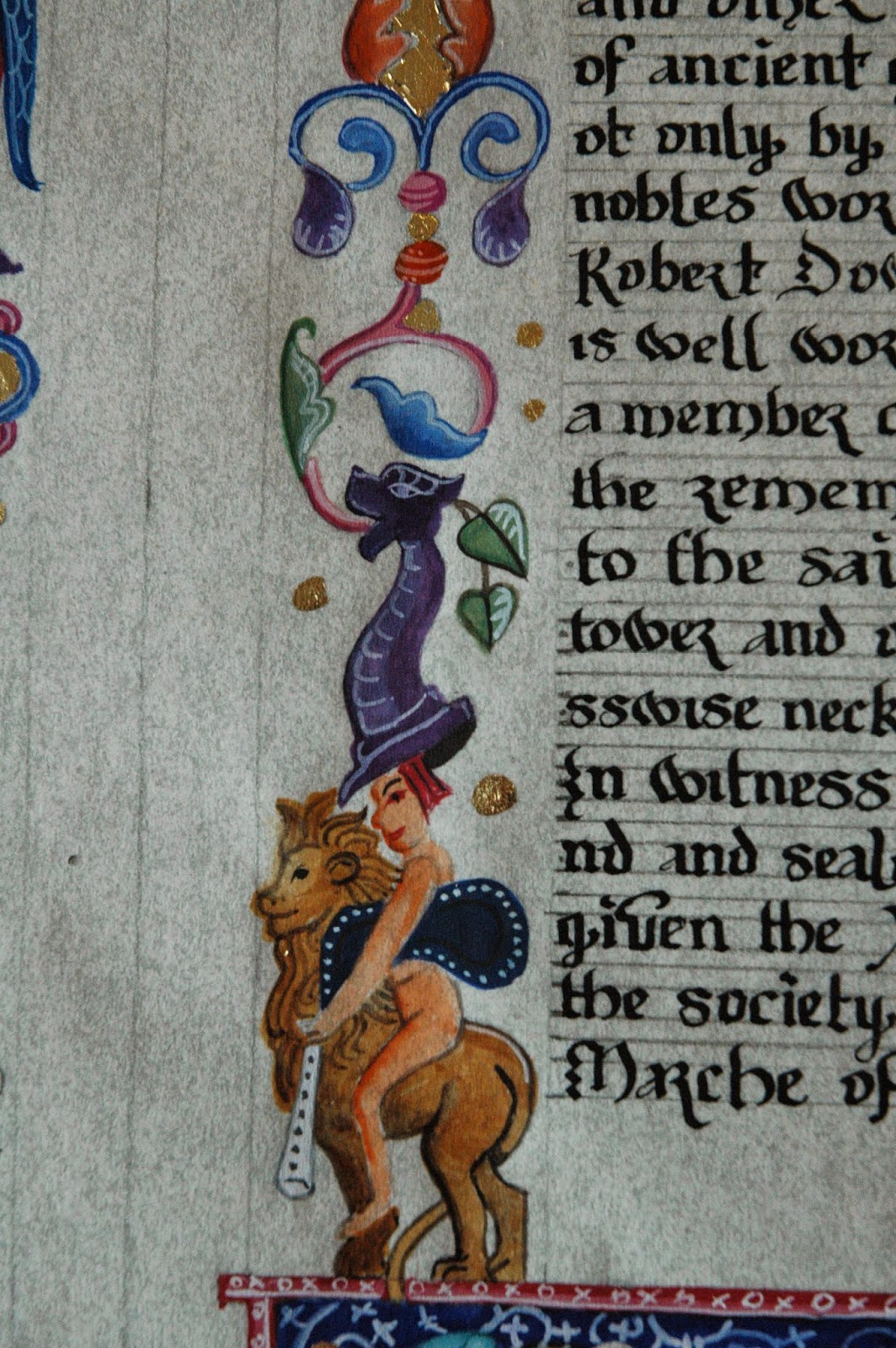 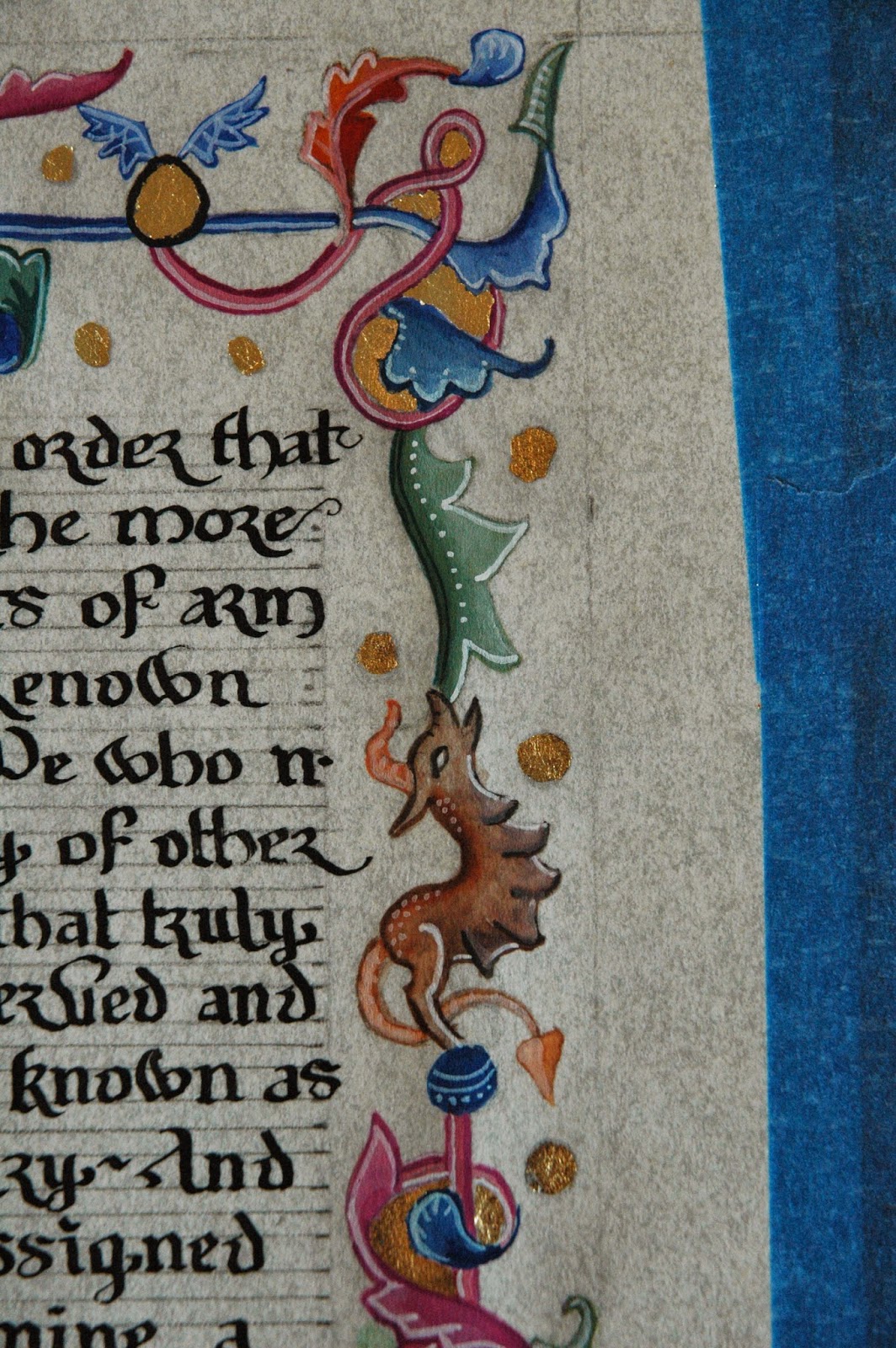 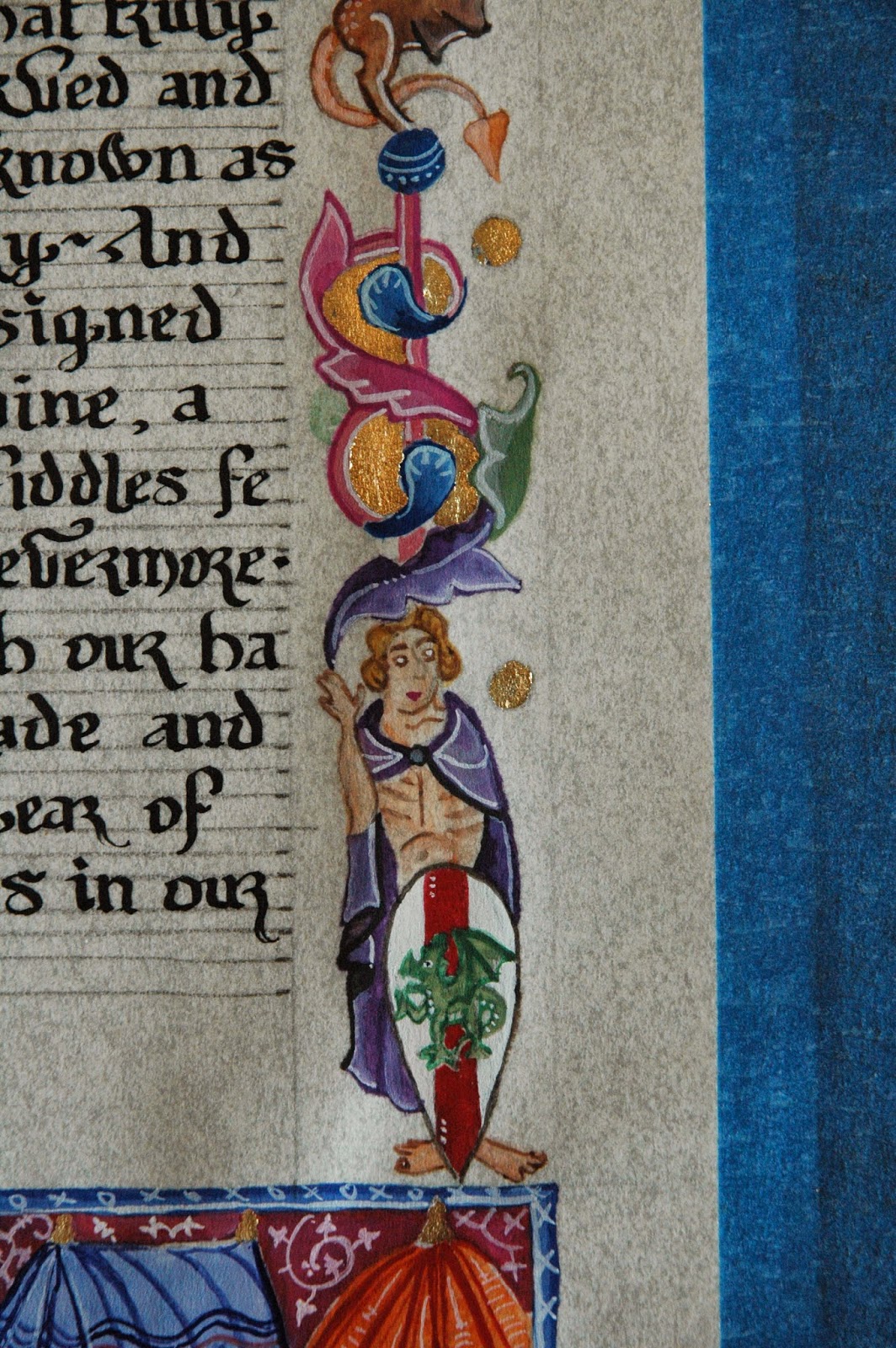 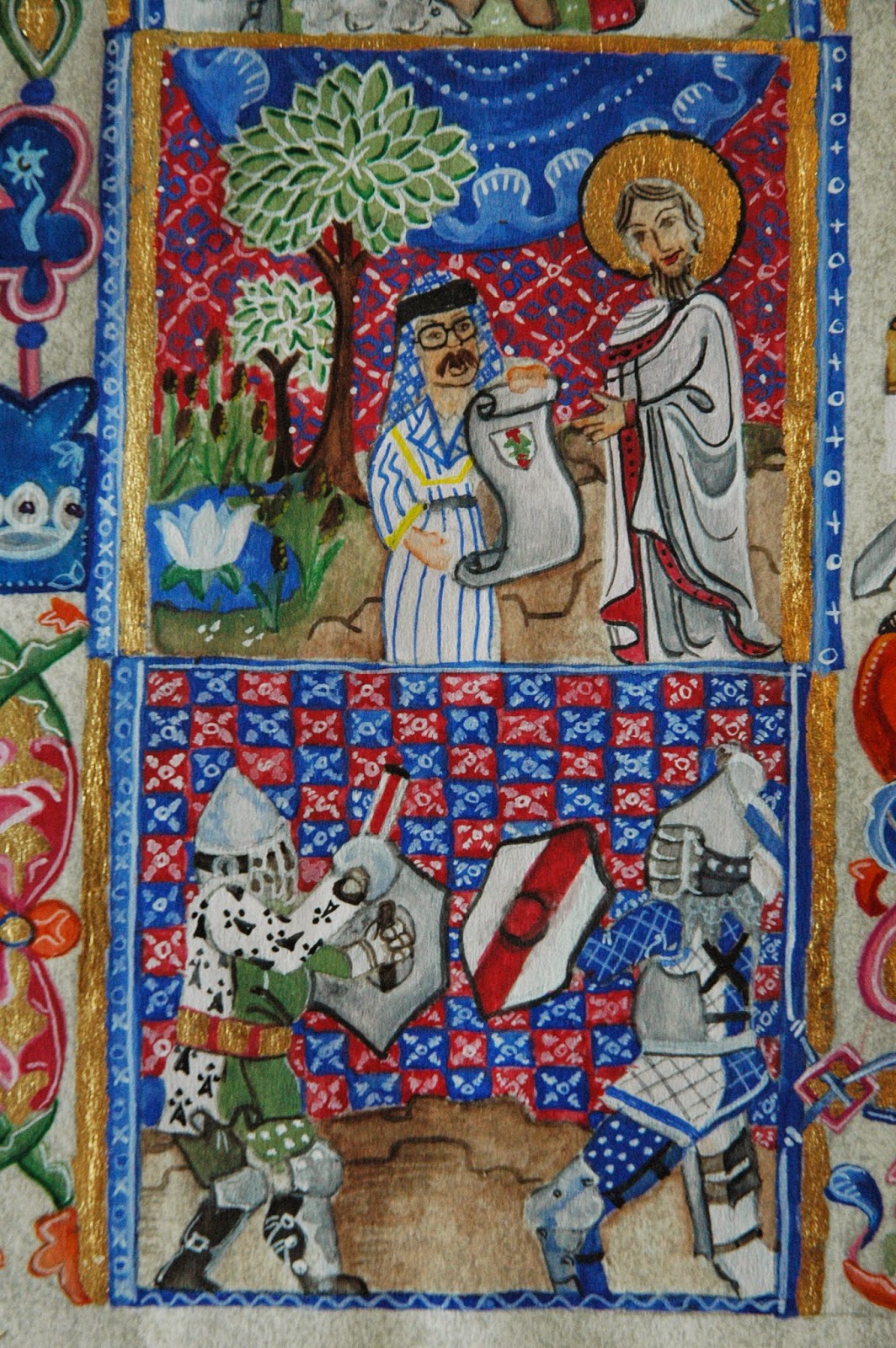 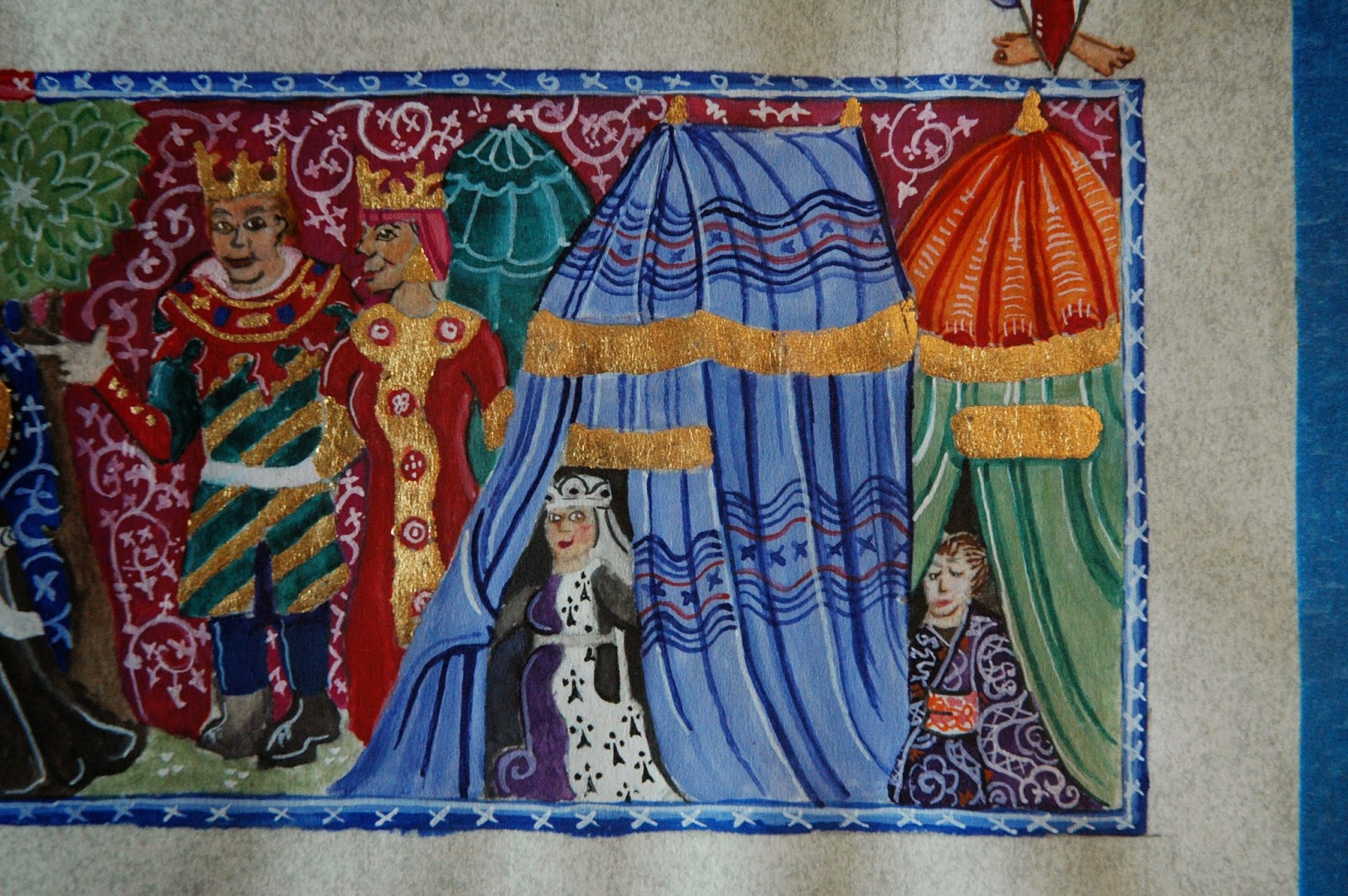 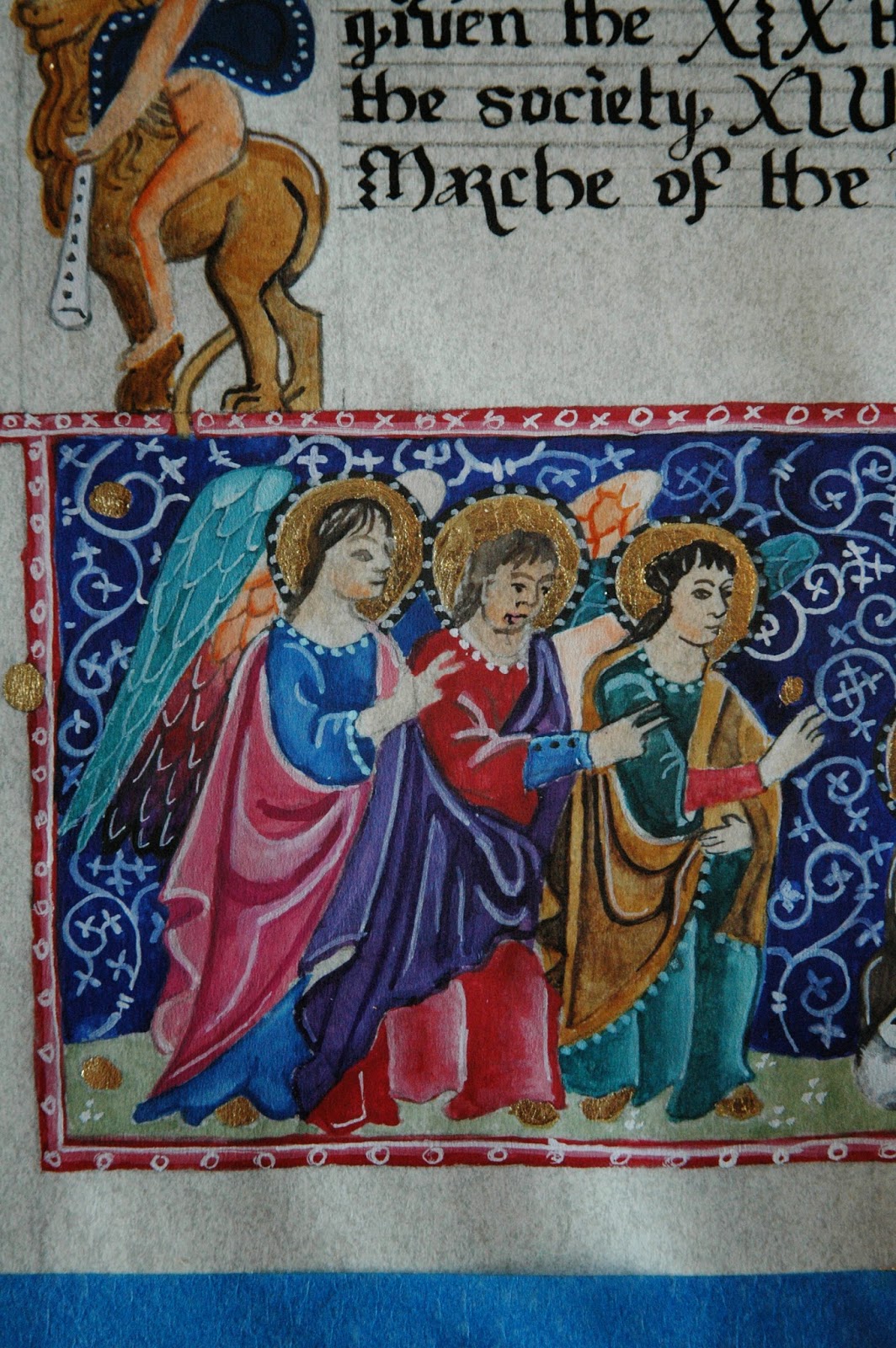 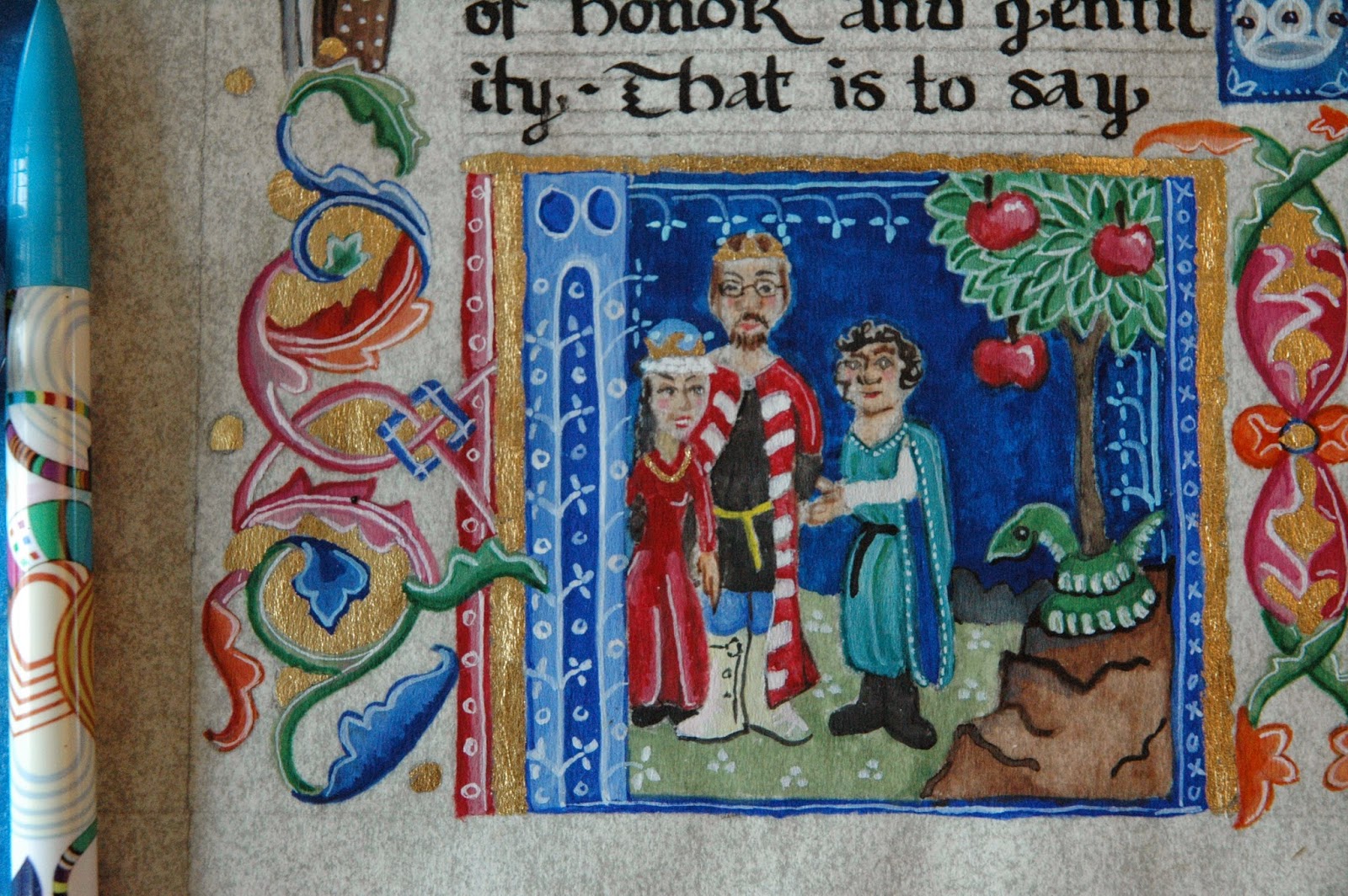 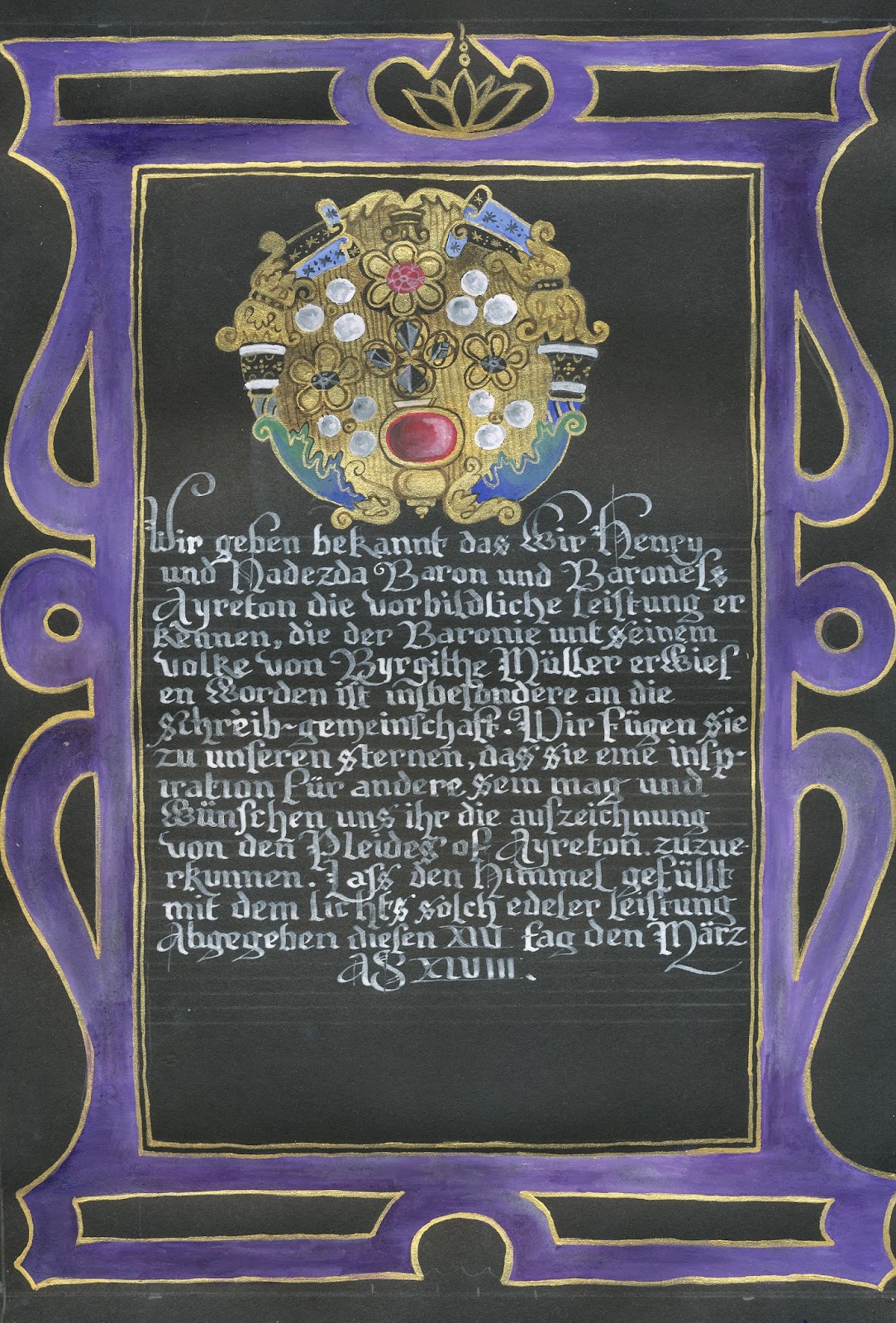 This illumination is an experiment from the Kleinodienbuch der Herzogin Anna von Bayern or for everyone else the Jewel Book of the Duchess Anna of Bavaria, p.11.  The manuscript is an inventory of the jewelry owned by the duke and his wife, Duchess Anna, a member of the Habsburg dynasty and a daughter of Emperor Ferdinand I. It was commissioned in 1552 and is simply a spectacular manuscript.  I wanted to try out the lovely black paper that was in a laurel prize basket that I won, and I thought that this particular illumination would be an excellent choice for experimentation.  It was not terribly complex, yet it had an elegance that just drew the eye. 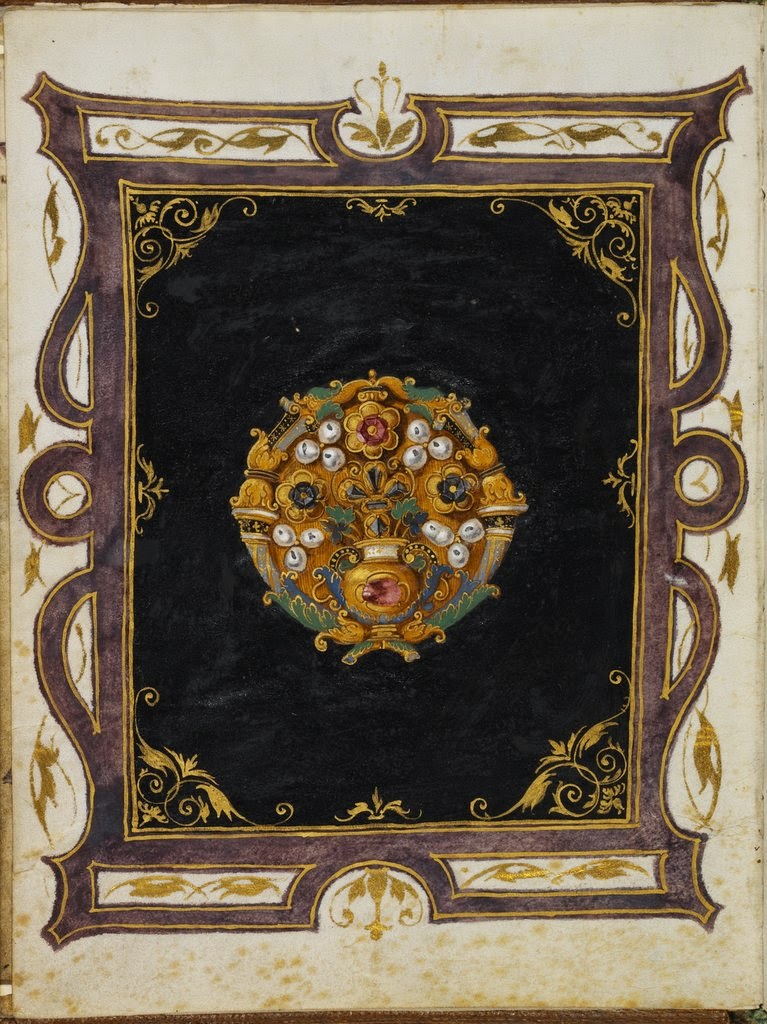 Yes I did write it in German.  No I do not speak German. Yes there is a spelling error, I noticed it after I wrote the word and then went...'crap I don't know how to fix it in this medium."  If you wish to correct my translation do feel free!

White ink.  Not cool.  Simply not cool, clumpy and sticky and generally hard to deal with. I found that dipping the pen first in water, then in the ink and THEN writing worked for about 10 words before I would have to rinse my nib completely. The white ink looks amazing however so I think I will fiddle with it more just to see what I can figure out.

Gold gouache on the black:  Simply epic.  The way you can just make it leap of the page with a minimum application of brown gouache as shadow was delightful.

Pearls:  They have the tendency to look like rock crystals instead of pearls unless you lay the white on heavy.  Next time, I will shade it with blue and purple as well as the grey to see if that mitigates the effect some.

Note to self: Next time, try a very thin gold gouache in place of ink and see how that works.
I do have a few other illuminations from this book in the works, and it is rapidly joining the 'go to for amazesauce sources' list.
Posted by Saraswati at 10:42 PM 8 comments: