It feels like I've done a lot of Silver Guards recently.  Not that I mind of course, it's just something that stuck out to me. 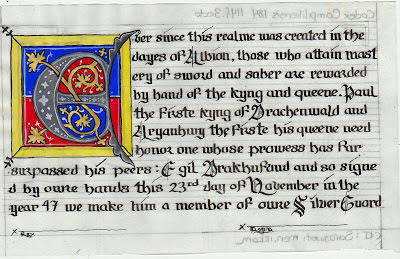 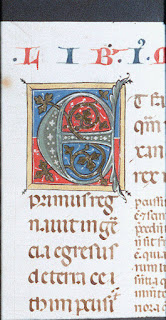 The source is Codex Campililiensis 184, folio 114 f 3 recto a 14th century initial.  It's small as far as my scrolls go, only a half an A4 size page.   I tried to be as true to the hand as I could and I managed better than normal.  I wrote with my new nibs, as provided by my Dark Mistress, and the difference in ink flow is amazing.  I've not quite worked out the sweet spot of this particular nib set but holy hell.  The only real issue I had is the yellow on the border is much too yellow, it should be creamy rather than that much more mustardy color.  I hesitated to fix it only because I was using the VERY thin perga that does not do well with any excess of water.

Text:  (This is the first time that I have attempted a more period sounding text, with olde style spelling)

Ever since this Realme was created in the dayes of Albion, those who attain  mastery of sword and saber are rewarded by hand of the kynge and qweene. Paul the fyrste Kyng of Drachenwald, and Aryanhwy the firste his queene need honor one who's prowess has far surpassed his peers:  Egil Drakhufvud and so signed by owre hands this 23rd day of November in the year 47 we make him a member of owre Silver Guard.
Posted by Saraswati at 10:05 AM 2 comments:

Posted this one on Facebook but I forgot to put up the process and documentation here on ze blog. 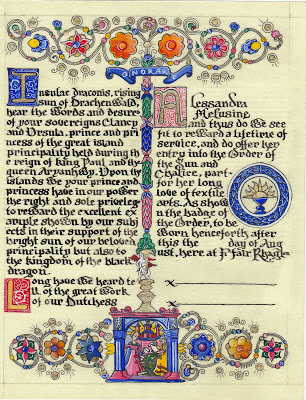 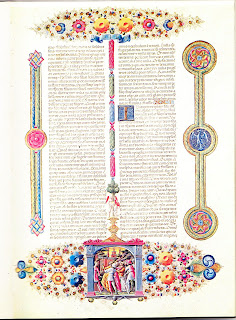 I was told that the recipient did late period Italian and took it fairly seriously, so I squealed with joy and got out my book on the Borso D'Este Bible, which is one of the most intricate and detailed pieces that I've ever had the pleasure of working from.

Now I had every intention of adding in the rose panel on the side, but when I wrote up my text I realized that I just could not make it fit in the space I had allotted myself if I had the rose, so I left it with just the award encircled in the vinework that is typical to this manuscript.
The capital letters I took from other pages of this manuscript, making sure that I found one in each color that I favored in the scroll, for the sake of balance.
This was done with gold leaf, guache and drawing ink and written in a Gothic Bastarde hand.  I will note that I did not have the normal problems with the gold leaf in this piece as I usually do.  It could be that I was only guilding little dots, but, it still needs to be said.

Insulae draconis, rising sun of Drachenwald, hear the words of your soverigns Clancy and Ursula prince and princess of the great island principality held during the reign of King Paul and the Queen Aryanhwy.

Upon the islands we, your pince and princess have in our power the right and sole privelege to reward the excellent example shown by our subjects in their support of the bright sun of our beloved principality but also to the kingdom of the black dragon.

Long have we heard tell of the great work of our Dutchess Alessandra Melusine and we do see it fit to reward a lifetime of service and do offer her entry in to the Order of the Sun and Chalice, partially for her long love of textile arts.

As shown here, the badge of the order to be worn henceforth after this the (NUMBER) day of August here at Ffair Rhaglen.


Posted by Saraswati at 4:34 PM No comments: 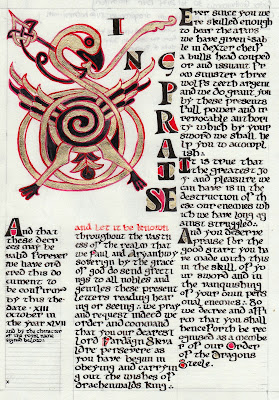 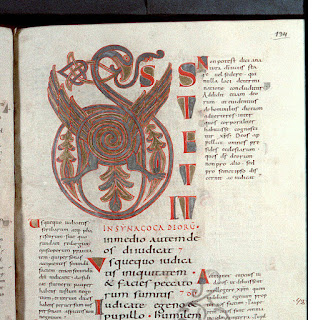 So I started this particular scroll with the idea in my head to work it precisely as the exemplar showed, in gold and silver.  I applied the gold leafing first, and that went on fine, but when I went to apply the silver leafing it all went to hell in a handbasket.  The silver stuck to EVERYTHING, even where I didn't have size.  When I went to gently scrape it from my writing space because the brush just would not remove it, I tore the perg.  I was almost crying with frustration.

I restarted it the next day and decided to replace the silver with black, since period pieces tarnish fairly quickly and silver turns black.  I think it looks fairly cool.  I rather like how it ended up.

TEXT:
Sing praise and let it be known throughout the vastness of the realm that we Paul and Aryanwhy soverign by grace of God do send greetings to all nobles and gentles these present letters reading, hearing or seeing.

We pray and request, indeed we order and command, that you our dearest Lord Fardägn Skvaldre persevere, as you have begun, in obeying and carrying out the wishes of Drachenwald's King.

Ever since you were skilled enough to carry the arms we have given - Sable, in dexter chief a bull's head couped Or and issuant from sinister three wolf's teeth argent and we do grant you by these presents - full power and irrevocable authority,  which by your sword - we shall help you to accomplish.

It is true that the greatest joy and pleasure we can have is in the destruction of these our enemies which we have long against struggled.  And you deserve praise for the good start you have made with this in the skill of your sword and vanqishing of your own personal enemies.  So we decree and affirm that he shall henceforth be recognized as a member of our Order of the Dragon's Steel.

And that these decrees may be valid forever we have ordered this document to be confirmed by this the date 13 October in the year 47, and by the character of the Royal name, signed below.

Posted by Saraswati at 4:10 PM No comments: