This scroll is based on a runestone U 459 in Skråmsta. I found the photograph on the Swedish Hertitage Board's flickr account.  Usually I stear clear of Flickr, it seemed to be a fairly high quality image especially for one taken in 1914. 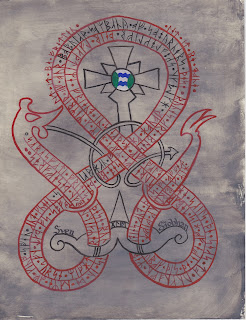 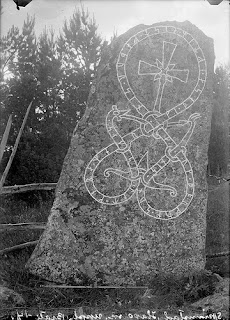 The text reads as follows:
Saraswati, writes these runes in the name of King Sven and Queen Siobhan who honor Haldan Skjoldklifr, their longtime friend.  In search of gold he sails the seas to unknown Meridies and thus we offer him a parting gift.  Upon this the eve of his departure we make him a member of our Popular Company of Sojurners. These runes are blessed by the gods, so that no curse might remain upon these words.  So let it be written.  So Let it be done!

The steps for this scroll were as follows (which I did document before my camera's memory card bit the dust.  I am trying to retreive them.)

1.  Stonewash pergamenata with grey guache and a superabsorbant paper towel.  A sponge will do, but I think it takes away from the effect if you use a commercial sponge.
2. Translate scroll into Runes and double check.
3. Paint on initial design- Accent work in black, everything else in red.
4. Pencil in Runes to deal with any spacing issues
5. Paint runes in red with accented words in black.
6. Paint PCS in the cross.

Now the runic text that I used was a 16 lined variant on younger futhark that is called huffed runes.  It is from a runecarver website sent to me as a guide for runecarving by the recipient so I thought it was remarkably appropriate.  The text is based on another runestone, So 179 that dates to around the year 1000.  It is a poem stone, and unique among runestones as it tells of the adventures of those for whom the stone was raised.
Posted by Saraswati at 1:53 PM No comments: