It's easy in a relitively close knit area, to get scroll assignments for people that you've made scrolls for in the past.  I got another assignment for Hildigunnr.  Normally I would have fit a scroll to her persona, but I only do vikingy scrolls at VERY special occasions...So...This one as well doesn't fit her persona either.  I don't think it bothers her. :D 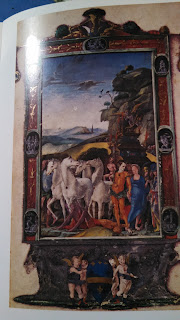 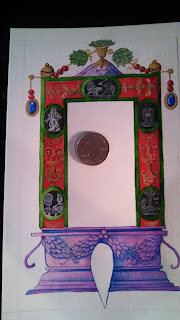 It started as a blank... 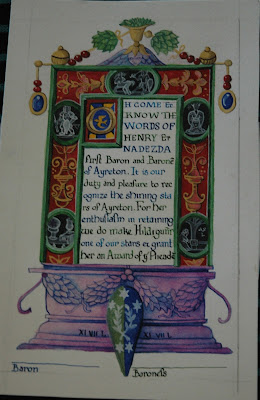 And turned into a scroll.

Posted by Saraswati at 6:35 AM No comments: 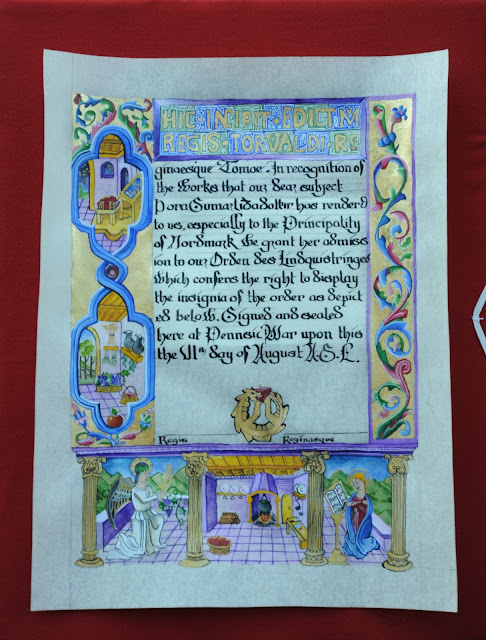 It reads:
Hic Incipit Edictum regis Torvaldi reginisque Tomoe.  In recognition of the works that our dear subkect Dora Sumarlidadottir has rendered to us, especially to the Principality of Nordmark, we grant her admission to our Orden des Lindquistringes, which confers the right to display the insignia of the order as depicted below.  Signed and sealed here at Pennsic War, upon this the 6th day of August A.S. 50.
Posted by Saraswati at 2:06 AM No comments:

So, I asked for a scroll from Drachenwald which I still do from time to time.  I was given the PCS for Racaire.  Now, Racaire I know by reputation alone, as does most of the known world because of her phenomenal emboridery and costuming pieces.

I knew it had to be fancy, and different.  So I chose a piece out of the Kleinodienbuch der Herzogin Anna von Bayern or for everyone else the Jewel Book of the Duchess Anna of Bavaria. The manuscript is an inventory of the jewelry owned by the duke and his wife, Duchess Anna, a member of the Habsburg dynasty and a daughter of Emperor Ferdinand I. It was commissioned in 1552 and I use it often.

In order to make it interesting, I painted in several embroidery stitches around the edges of things andI cut the badge from the scroll.  Then, in period fashion I stitched in the badge of the PCS.  Something I'd never tried before. 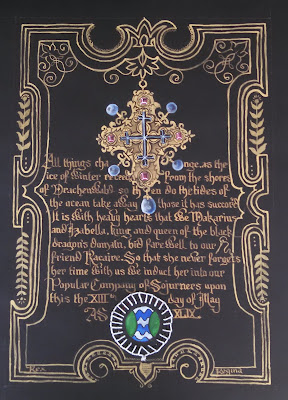 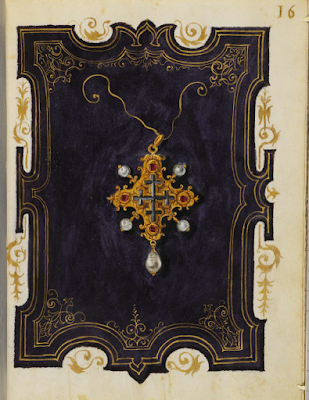 Posted by Saraswati at 12:08 AM No comments: