Blanks of Mine, Callig'd by Others

So, one of my favorite things is to make blanks.  I'm improving my calligraphy, but it still makes me a little twitchy.  I realize that I have come a long way from where I started- and am getting to the point where I can understand why calligraphers get all zen and zoned.  In this post I would like to showcase some of the Calligraphers who have finished my blanks. They allow me to experience the joy of painting just for the sake of painting.  <3

These are just from the Midrealm, Drachenwald's calligraphers will get their own post when I track down the emails and facebook messages with the pictures in them. 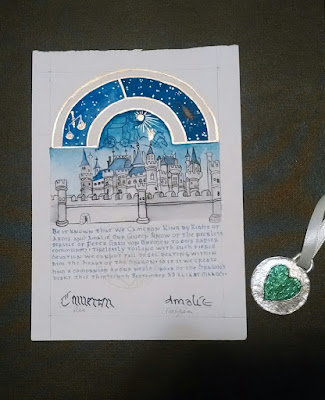 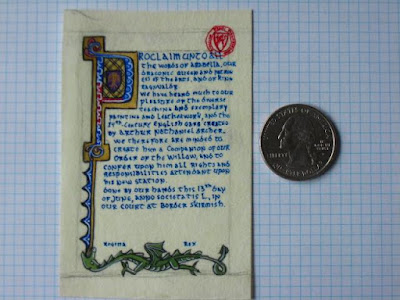 No words are necissary for this one.  Look how TINY it is.  He's a miracle worker to fit that many words into so small a space. 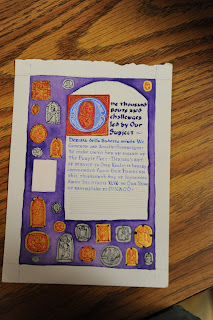 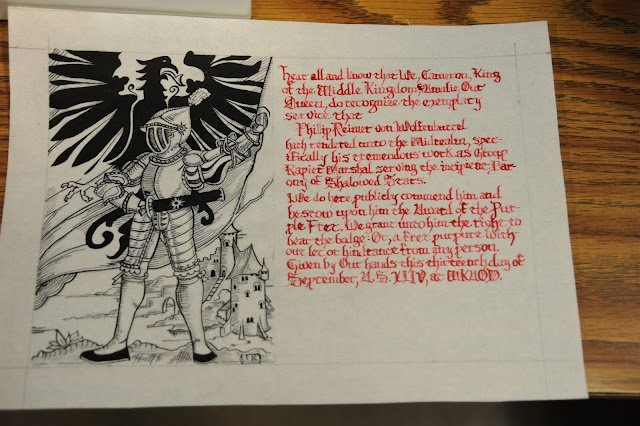 If you go 3 posts down, you will see a full blog entry on the one done by Mistress Gianetta- Ayreton.

I've not done a blog post in a while.  A very long while indeed.  My apologies.  Life got very busy with the start of nursing school, and all the work that it entails.  After 16 months, I have my BSN, and I take my NCLEX on Thursday.
Scrollage:
This was a baronial scroll:  the Order of the Leo.  It is given for excellence in the arts for the Barony of Ayreton.
It reads:  Let it be known by all that we Henry Baron and Baroness Nadezda of Ayreton do recognize the wealth of talent that Heather Hall hat shared with the Barony.  We do upon this XXVIIIth day of March AS XLIX make her a Comanion of the Order of Leo, for her long and outstanding service to the scribal arts.

The Scroll itself is another from the Kleinodienbuch der Herzogin Anna von Bayern or for everyone else the Jewel Book of the Duchess Anna of Bavaria. The manuscript is an inventory of the jewelry owned by the duke and his wife, Duchess Anna, a member of the Habsburg dynasty and a daughter of Emperor Ferdinand I. It was commissioned in 1552 and is simply a spectacular manuscript. One of my long term scribal goals is to reproduce every page of it.  I LOVE this manuscript. 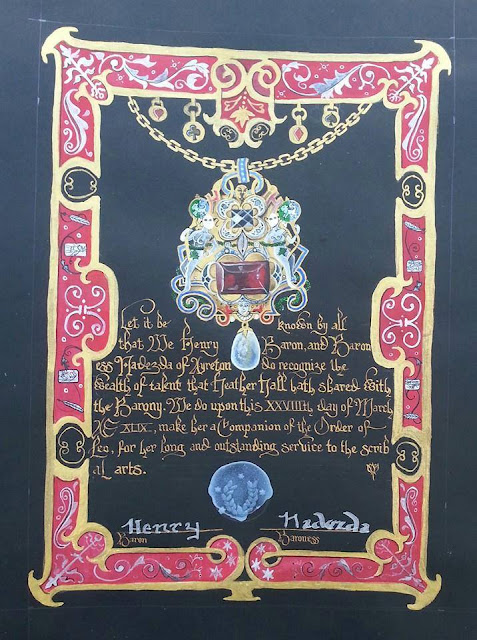 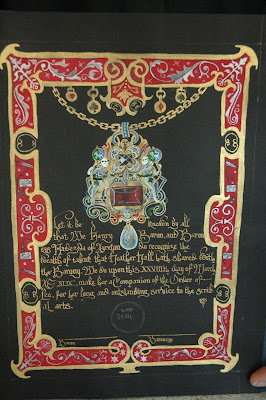 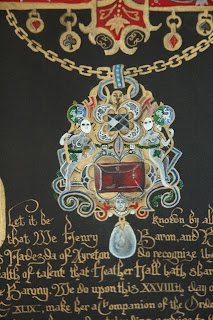 What's SUPER sneaky is we got called up in the Baronial Court together.  I did her Leo Scroll.  She did my Leo Scroll-which I adore.
<3
Posted by Saraswati at 12:06 AM 1 comment: