So I just completed a Pair of PCS's from Padraig and Elsa's reign in 1995.  It was requested when it was given to me that they be in matching styles or even entirely matching if possible.

So I went to my trusty source the Balliol College library  Where I found MS 238 E named  Fons memorabilium uniuersi which was made for William Gray Bishop of Ely by Domenico Bandini in 1444-1448.  Folio 146 verso which has the initial letter cut out.  Figuring it could be whatever letter I wanted in that case I used the flowers in the  center for the ascender and descender on the Initial and made the initial itself a P. 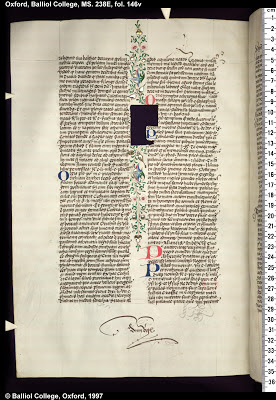 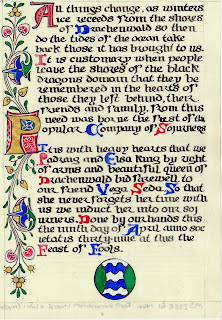 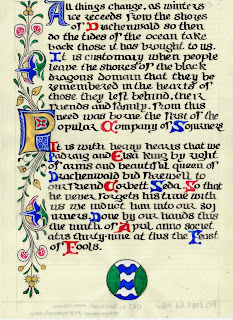 They read as follows:  All things change, as winter's ice receeds from the shores of Drachenwald so then do the tides of the ocean take back those it has brought to us.It is customary when people leave the shores of the black dragons domain, that they be remembered in the hearts of their friends.  From this need was borne the Popular Company of Sojurners.

It is with heavy hearts that we Padraig and Elsa king by right of arms and beautiful queen of Drachenwald bid farewell to our friend Vega Seda/Corbett Seda.  So that he never forgets his time with us we induct him into our Sojurners.  Done by our hands this the ninth day of April Anno Societatis thirty nine at this the feast of fools.