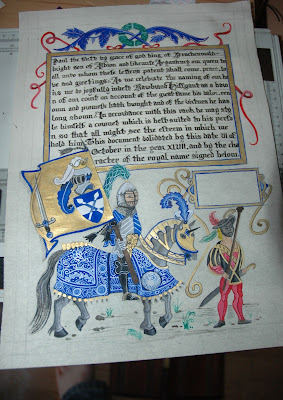 This scroll reads as follows:  Paul the First, by grace of god king of Drachenwald, bright son of Albion and likewise Aryanhwy I our queen to all unto whom these letters patent shall come, peace, love and greetings.  As we celebrate the naming of our heirs,we do joyfully invest this man Barobrand Hissgant as a Baron of the Court on account of the great fame his valor renown and prowess hath brought and of the virtures he has long shown. In accordance with his rank he may style himself a coronet which is best suited to his person so that all might see the esteem in which we hold him. This document validates by this the date 6 October of the year 47 and by the character of the royal name signed below.


Now this scroll was based on the Triumphant Return of Maximillian the First. Now there are two versions of this that I could find online one with wording and the other one blacked out.  I used the blacked out one because of its higher image quality as well as being able to zoom in on the image itself. 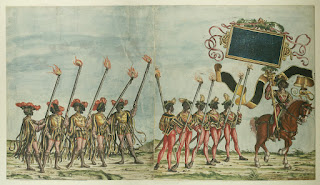 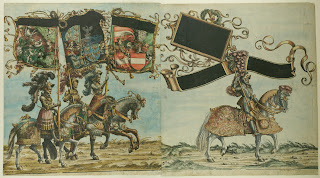