How silly of me, to forget a draft of a post that I started.  Ah well.  Here goes!
I've been doing a lot of research into different scroll styles that I want to try.  Basically what happens with that is my ADHD addled mind goes 'Squee it's so pretty'  and I save the image to my external hard drive with the intent of giving it a try and then it just sits there.

I needed an excuse to get some stuff done in a different style and I give you the Realms of the Orient.  Japan and China.

Daito Saiiki-ki. Heian Period, 12th century   A record of priest Xuan-zhuang's trip to India.  Given the shinyness of the original, I am speculating that the indigo paper was enameled afterwards, or burnished to a fine shine.  Perhaps both, it's hard to say from here.  I don't know much about the process. 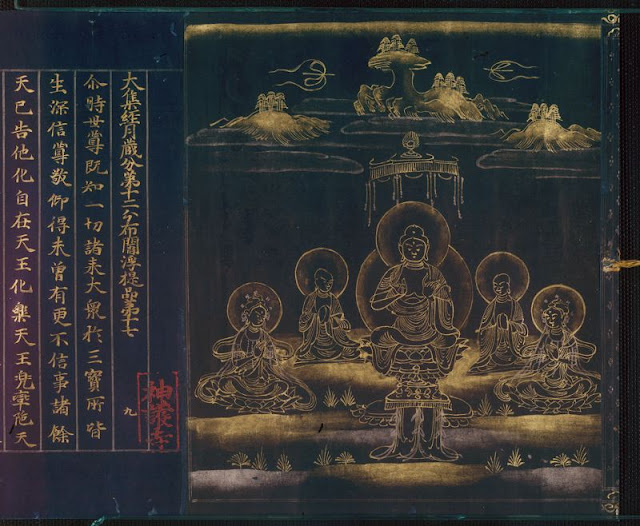 I felt that the use of the Japanese source for a Chinese persona Mei Li was appropriate due to the cultural overlap that the two countries shared.  The image of buddha with his attendants occurs in both cultures in very similar arrangements. I thought this one was more striking than the ink washed ones in 'color' that I could find from China. 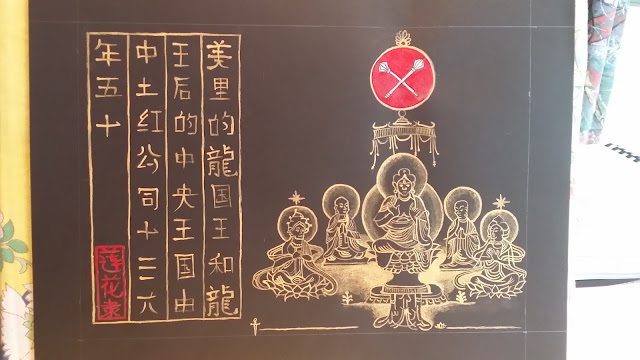 This effect was created by washes of Schminke gold gouache on the black paper.  I would paint a line down and then with a wet brush pull the line into the black, to get the gradient effect.  I really like how striking the colors are against the black paper.
The words I'm almost ashamed to admit were translated using Google Translate.  I didn't have time to fiddle with it, but I needed it to look proper.  I am sure that the grammar is atrocious. 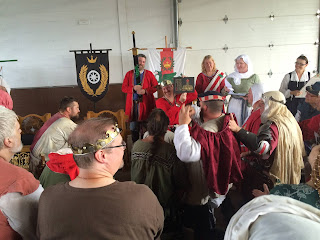 Photo of the award being given courtesy of: Michelle 'Cella' Schleis. 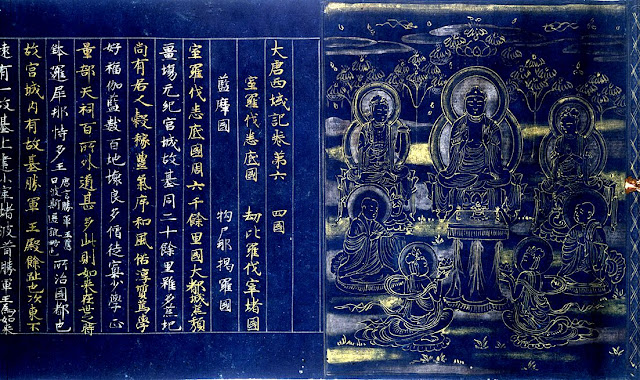 And the above the Jingoji Sutra, a 12th century Japanese idigo dyed paper with gold and silver ink masterpiece.  This- with the help of Baron Foro became the Kings Chalice for Kitsune.  If their Majesties Northshield read this entry; this man is a Jewel.  He offered to translate any text we provide into Japanese, purely for the joy of doing so. Truly he made this offer to the entirety of the world's scribal community and it was my pleasure to take him up upon it.  To my unending amazement, in less than a full day, he had rendered the entirety of my quite lengthy text into characters.  I cannot commend him to you highly enough. 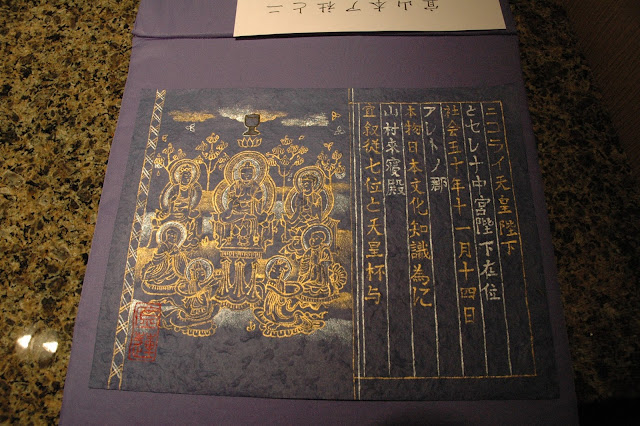 It reads:
In the reign of Nikolai tenno heika and Serena chuugu-­‐heika AS 50, November 14 In the Barony of Aryeton For her excellence in Japanese Culture authenticity Yamamura Kitsune dono is hereby  conferred Senior 7th court rank and is given the Award of the Kings Chalice.


For this one, I purchased Indigo Mulberry paper, a traditional type of paper, and did some experimentation.  In order to get the gold and silver gouache to sit politely on the page, I had to first burnish the entirety of the page.  It is a difficult but rewarding medium to work on, and the results quite speak for themselves.

It is from these two pieces that the moniker of 'lotus scribe' has evolved.  It is after all only appropriate to sign your work in this style.

Posted by Saraswati at 4:35 AM