So, this is another one of those scrolls that rests close to my heart.  When I saw her get put on vigil, I was just another of the crowd of people crying tears of joy for Maire.  I had to find an exemplaar worthy of her.  I looked and looked for later period Irish Manuscripts but they were all so boring that I didn't think them worthy of being a Pelican scroll.  So at that point I expanded my search terms to late period Irish Artifacts.

I found: The Shrine of Miosach 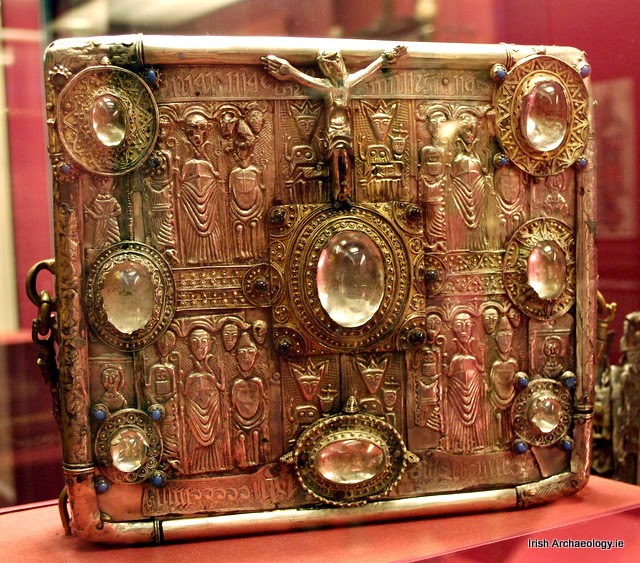 This ornate book shrine comes from Clonmany, Inishowen, Co. Donegal, where the O’Morrison family were its traditional keepers. Associated with Saint Cairneach, the oldest parts of the shrine appear to date from the 11th century AD.

The core of the artifact consists of a single piece of yew wood that was hollowed out to receive a relic, most likely a religious text. The wood was then adorned with a series of decorative panels. On the sides these consist of bronze plates of late 11th century date, that have been inlaid with silver and enamel.  The back of the shrine is embellished with another bronze panel that contains a striking pattern of crosses, highlighted with red enamel. The elaborate front was added by Brian O’ Morrison in 1534. It is decorated with silver foil and large rock crystal jewels. The crucified Christ is centrally placed, as are four panels containing images of the crowned Virgin and Child. A further four panels also adorn the front of the shrine and these depict three figures, who probably represent Saints Bridget, Patrick and Colm Cille. (Irish Archaeology.ie)

It was PERFECT.  And thus the scroll began.

Times are on my whiteboard at home, and I am not currently at home.  Will fill in later.
Facebook Stalking for Pictures:
Layout:
Painting:
Calligraphy:
Total Hours:

I lost the penciled full pieces when my camera gestured rudely at me.  Sorry if anyone wanted to see my layout before I began the painting process.  I started at the bottom and sides, simply for ease since it was painter's taped to my glass topped desk to reduce rippling. 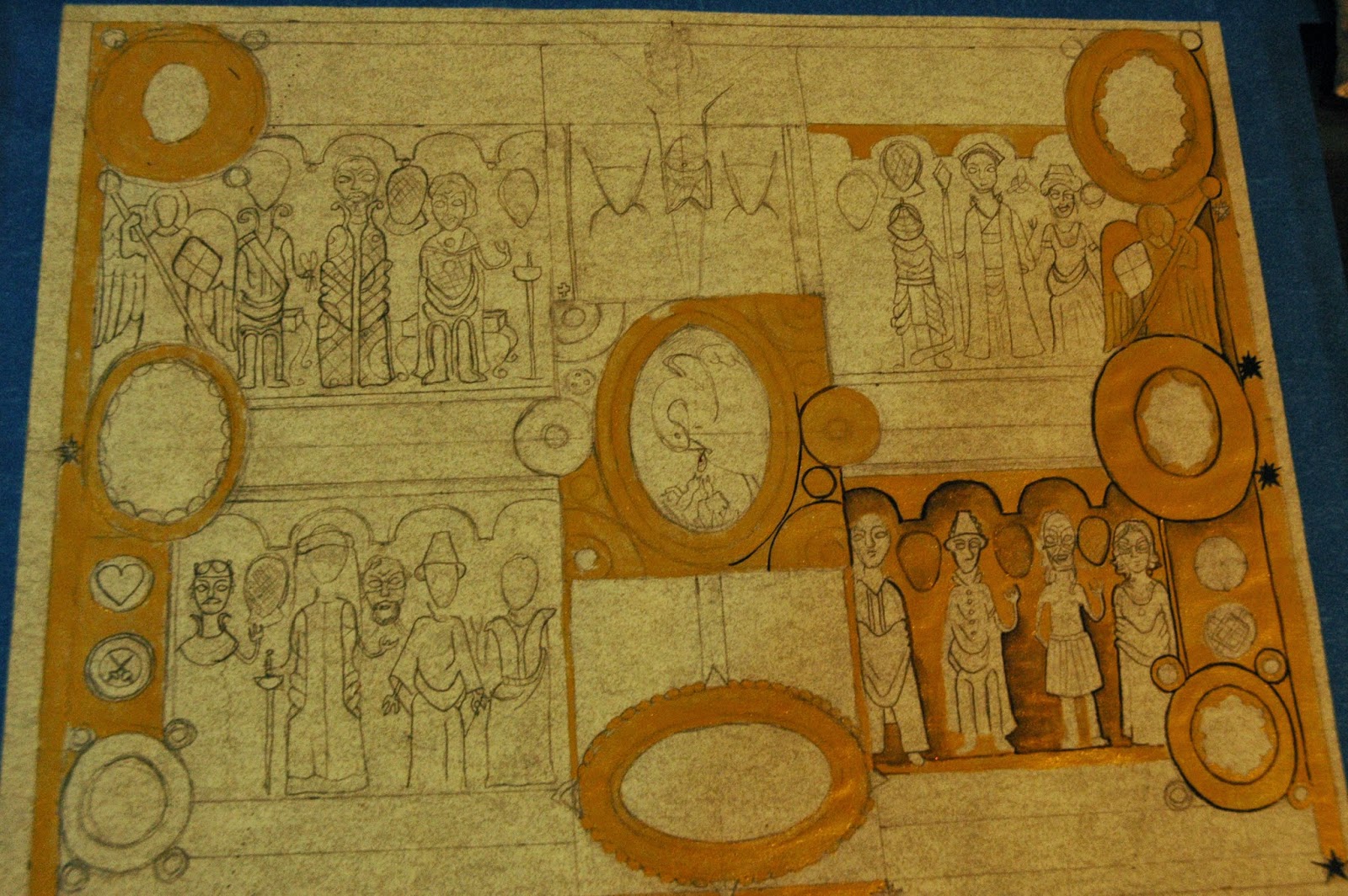 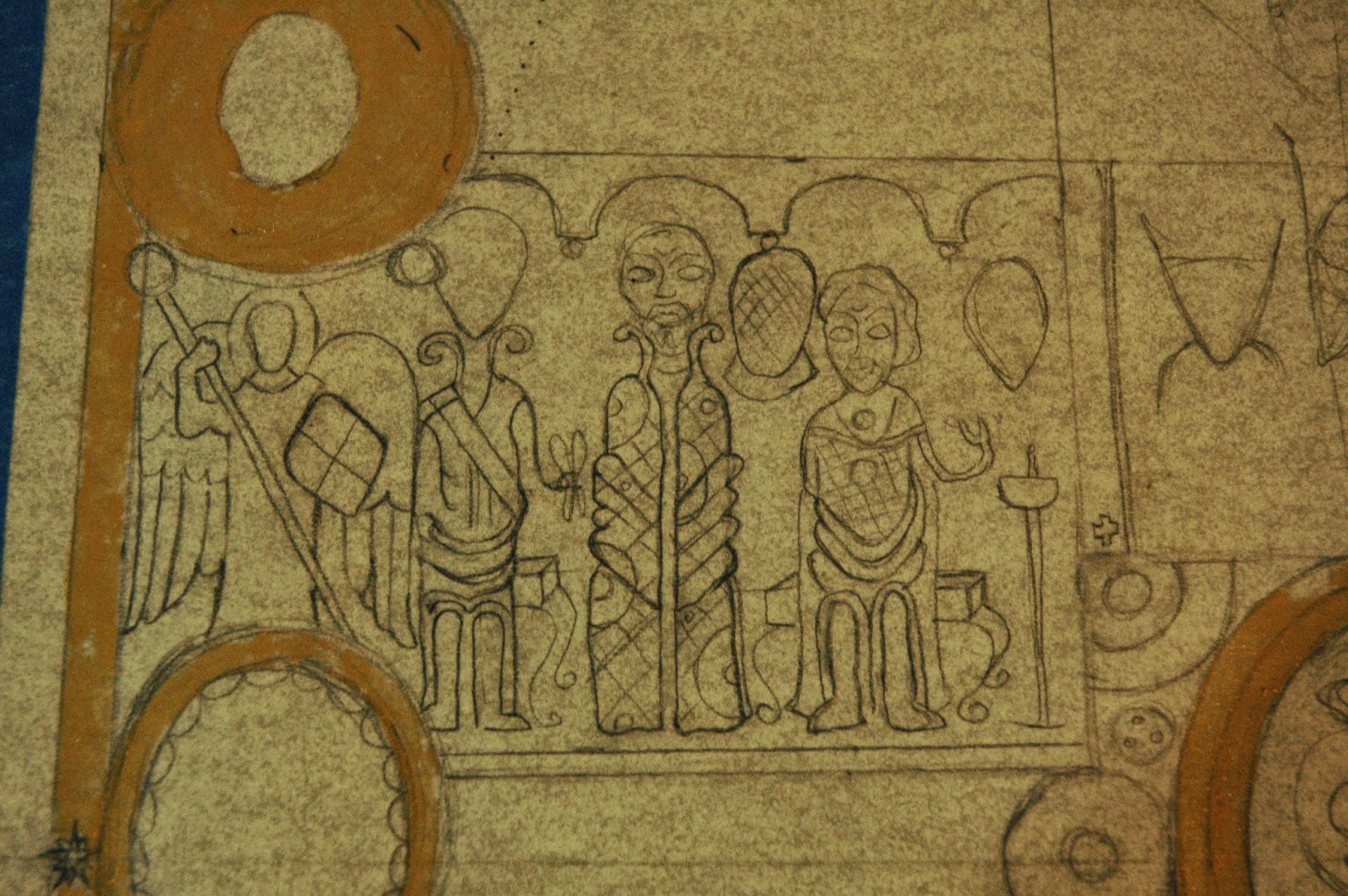 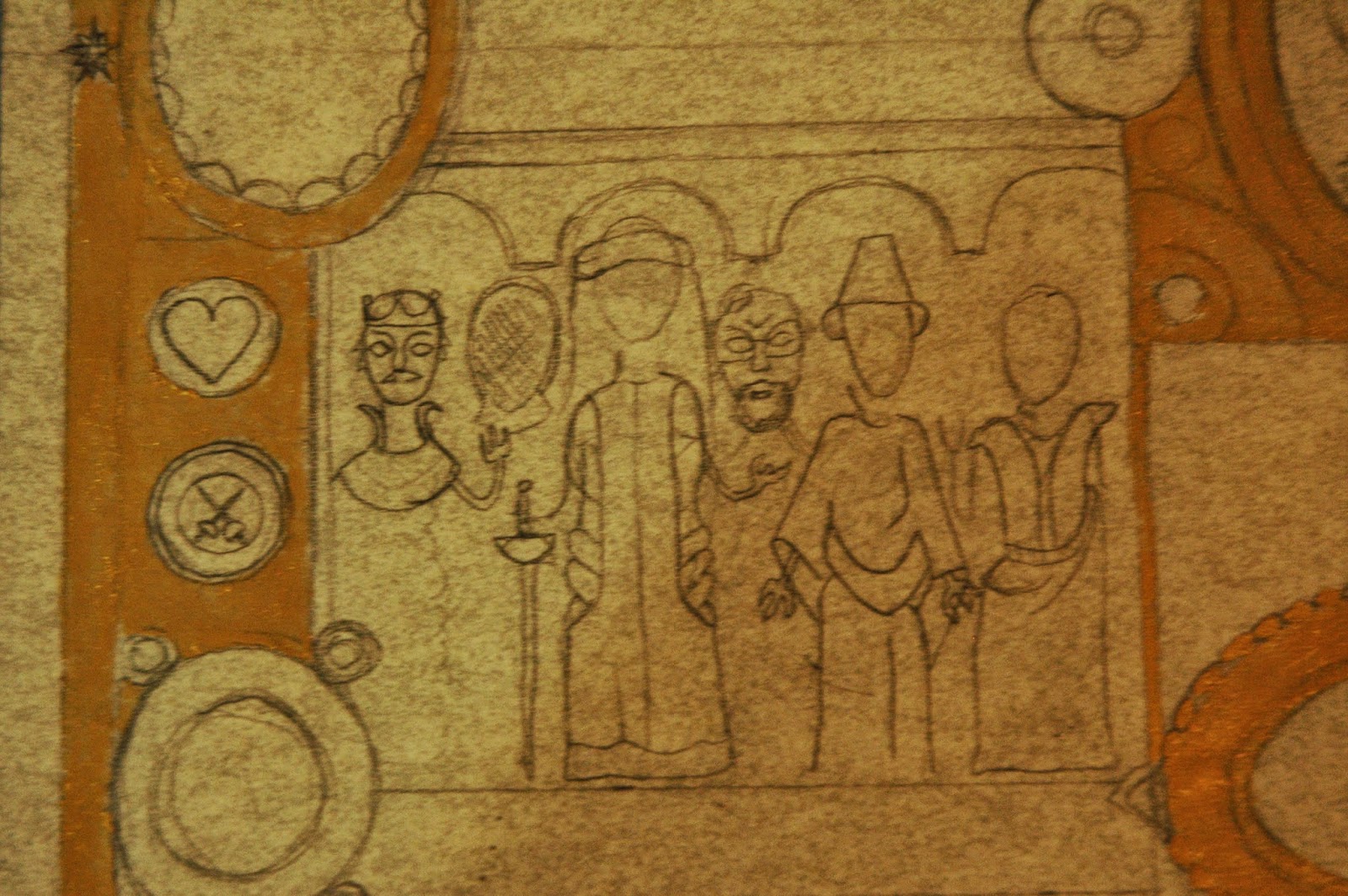 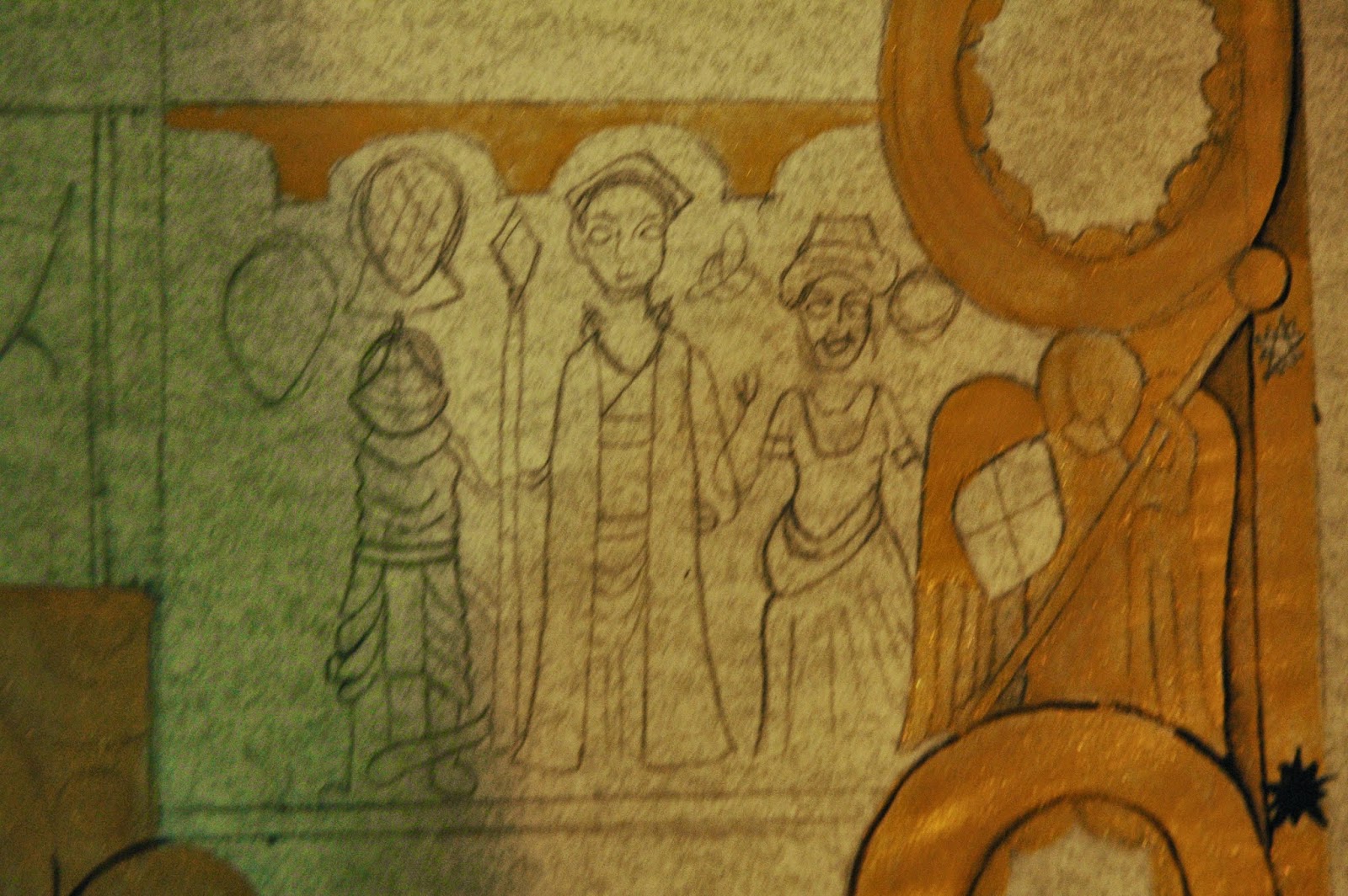 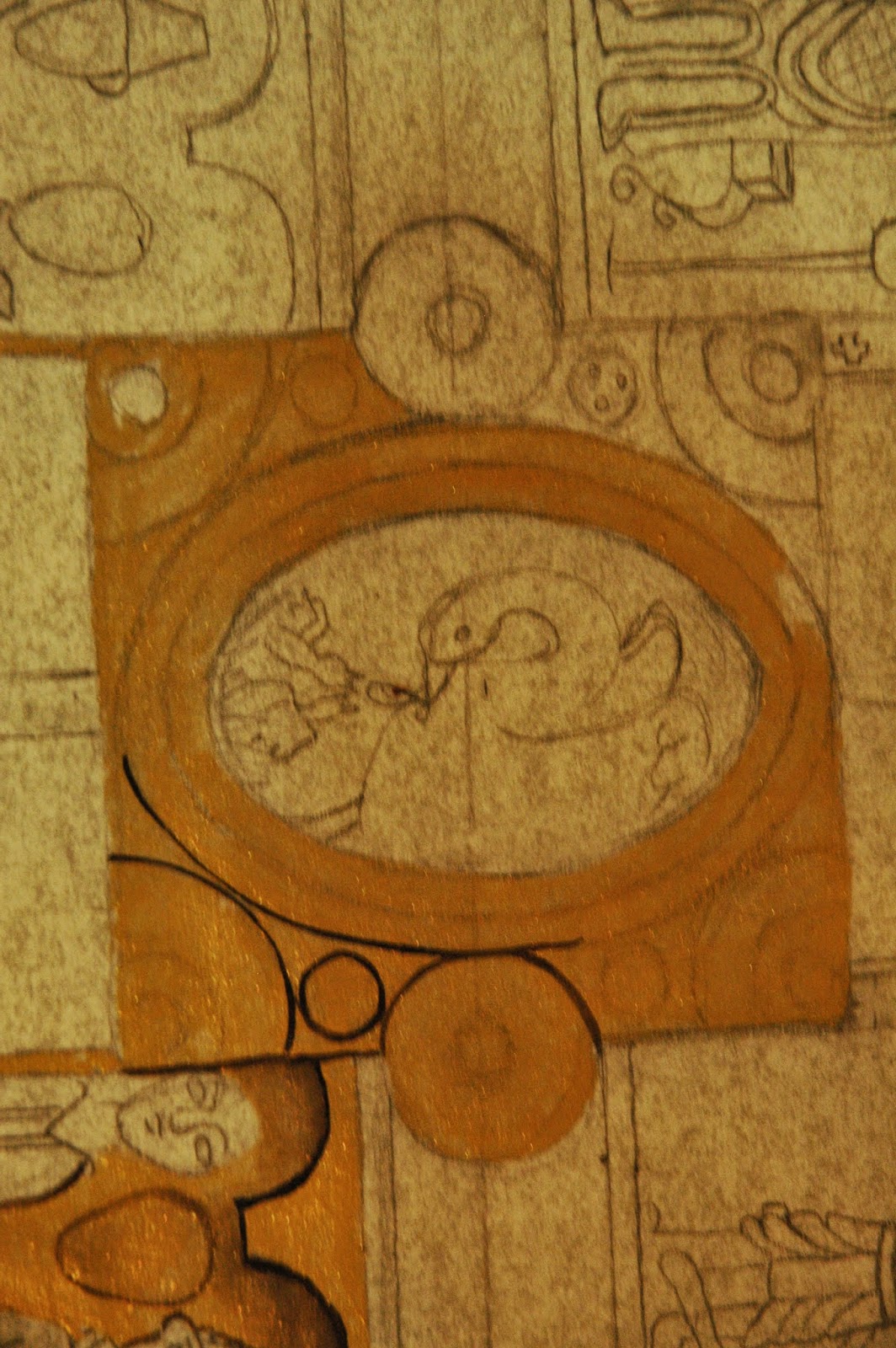 At this point, I knew I had to throw in some color, because if it were monochrome gold for the entire thing with only rock crystals, I would go mad.  So, the jewels got colors, and fancier shading. 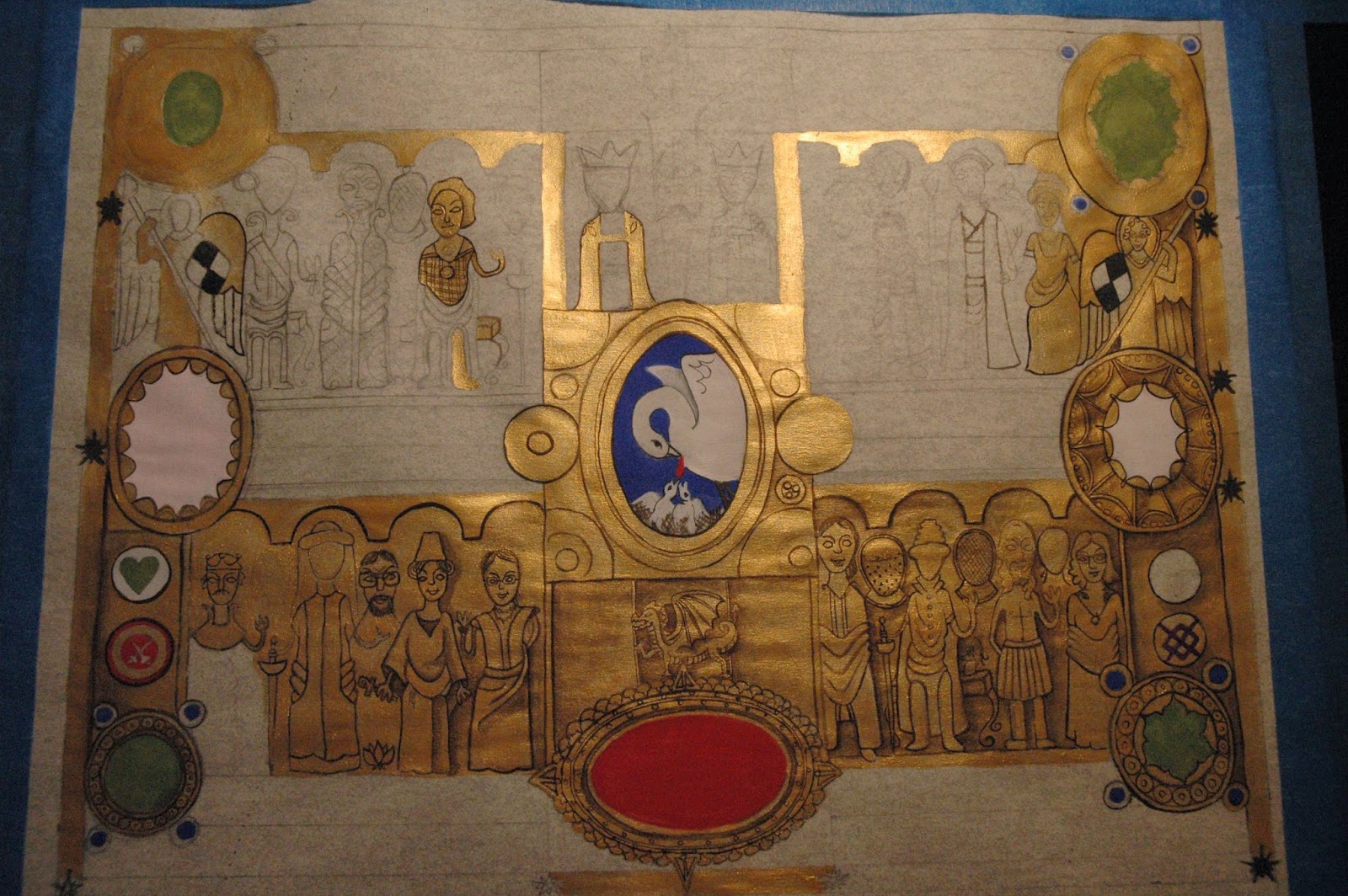 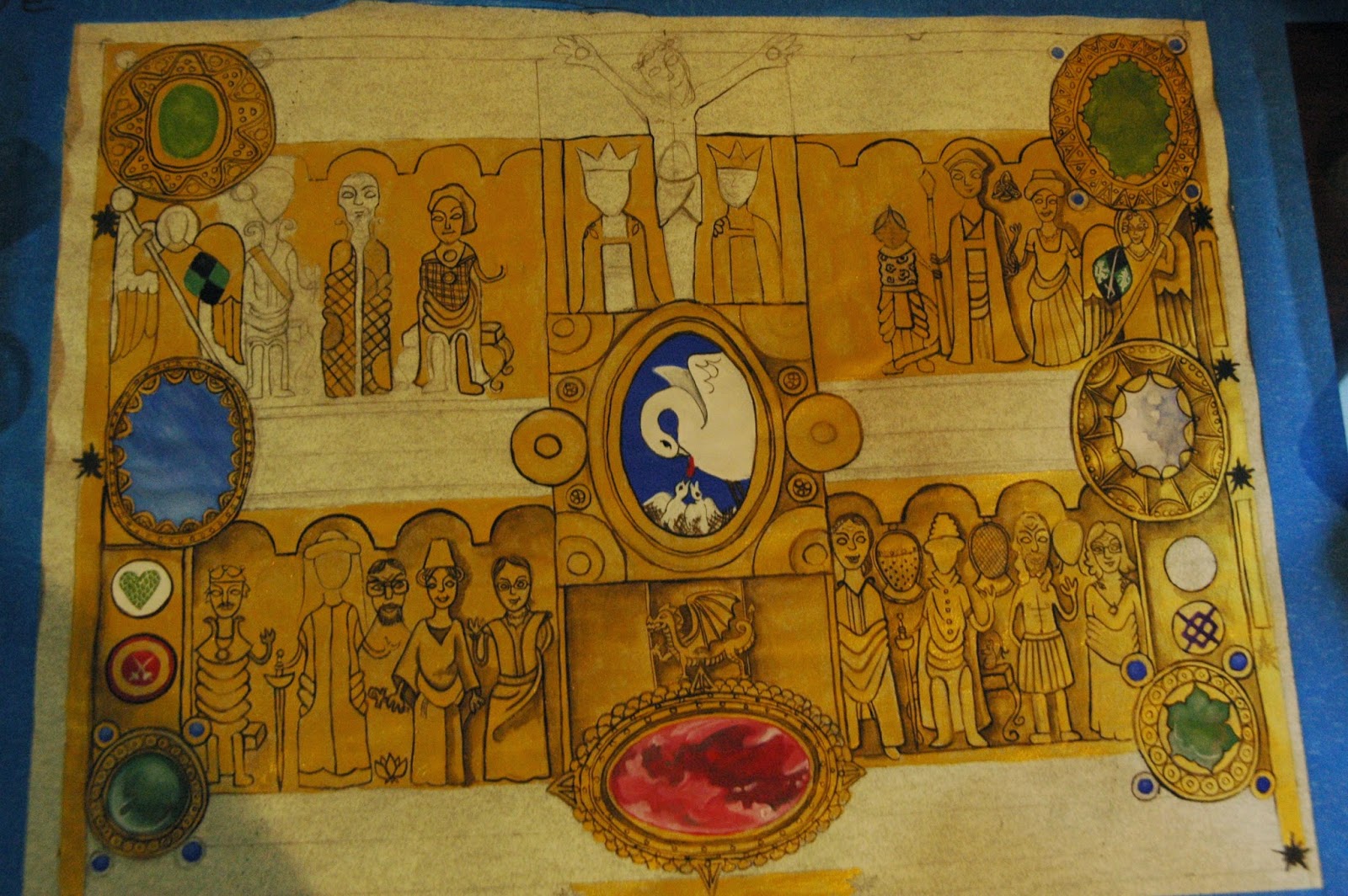 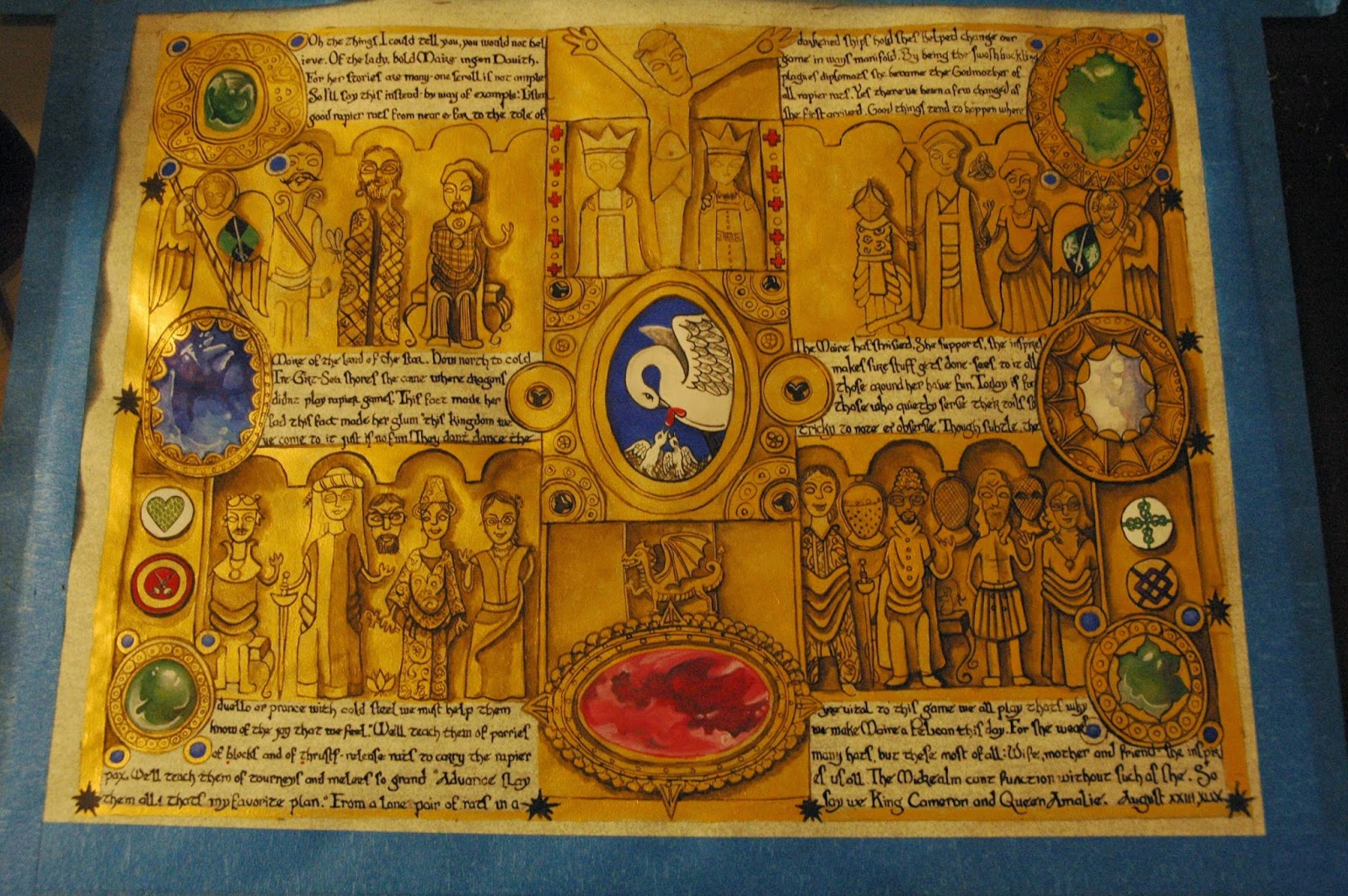 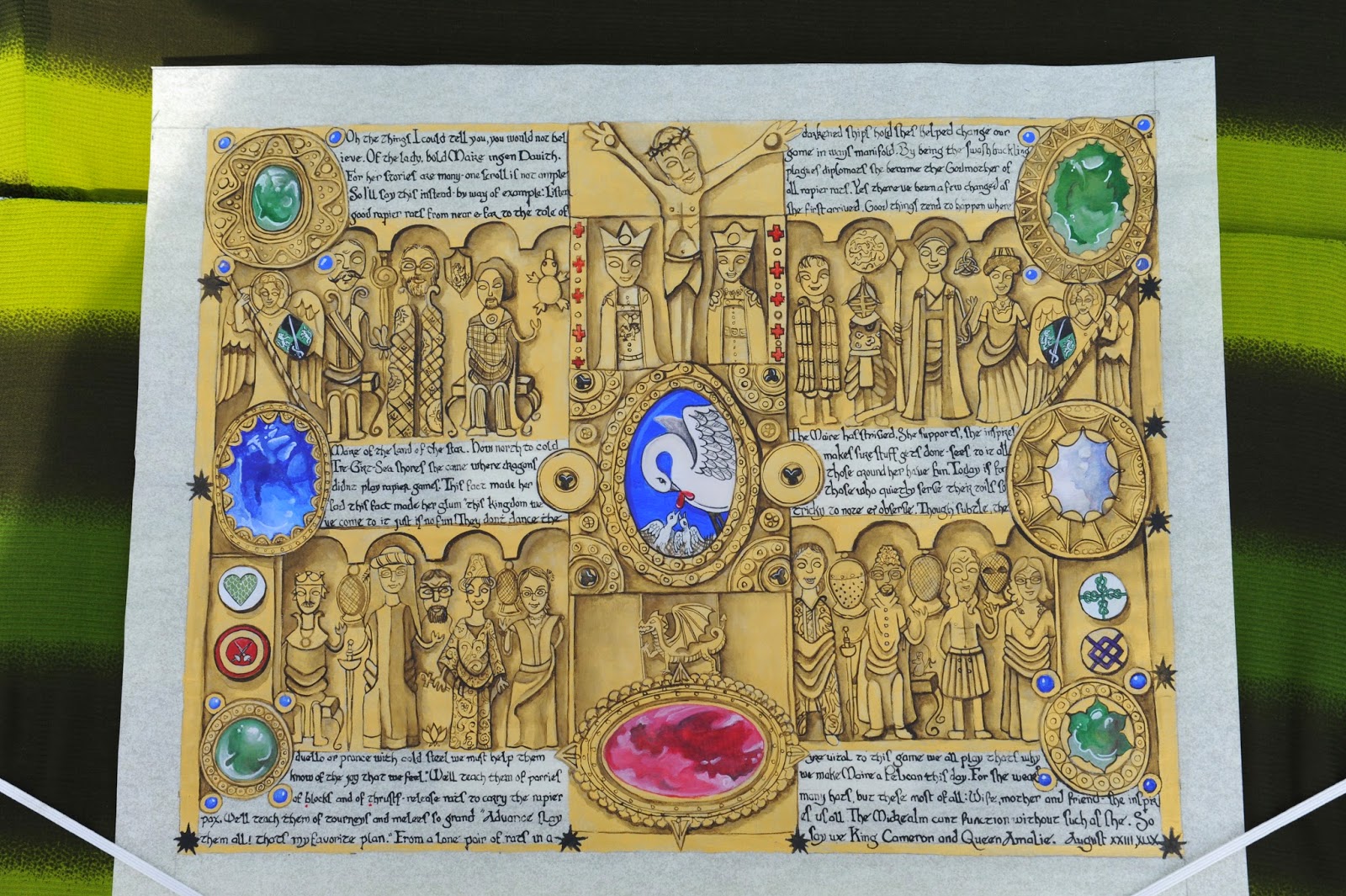 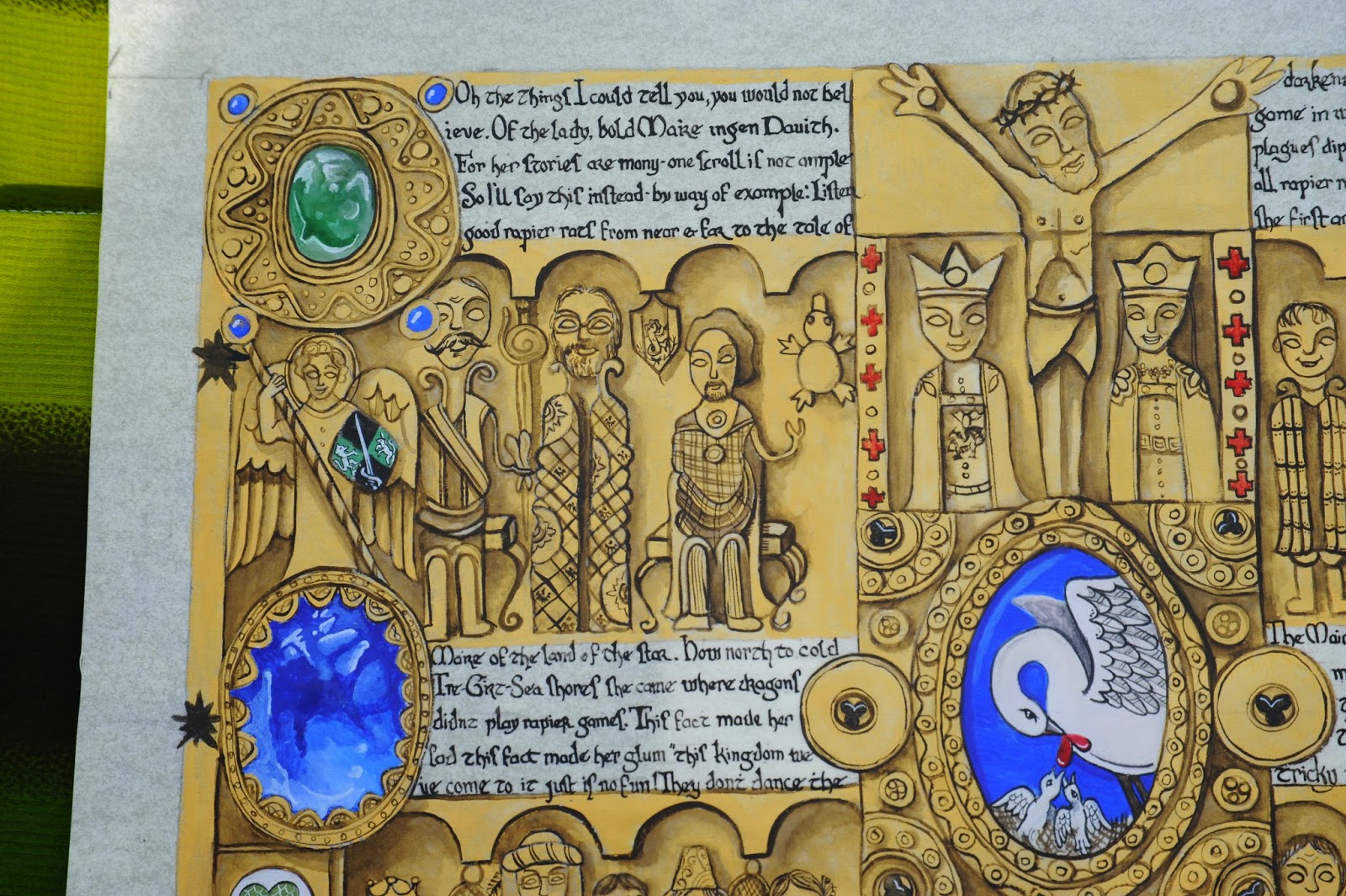 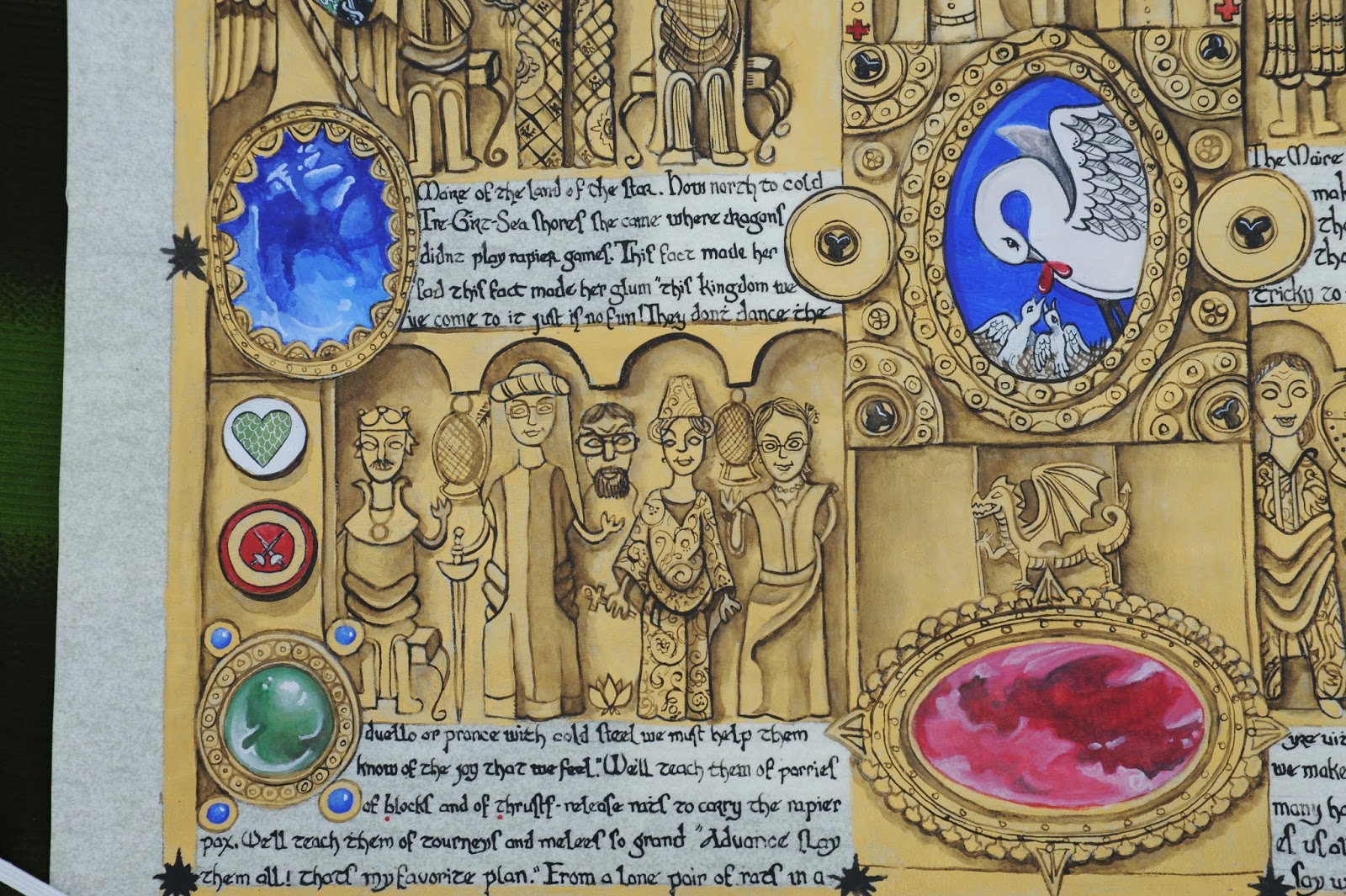 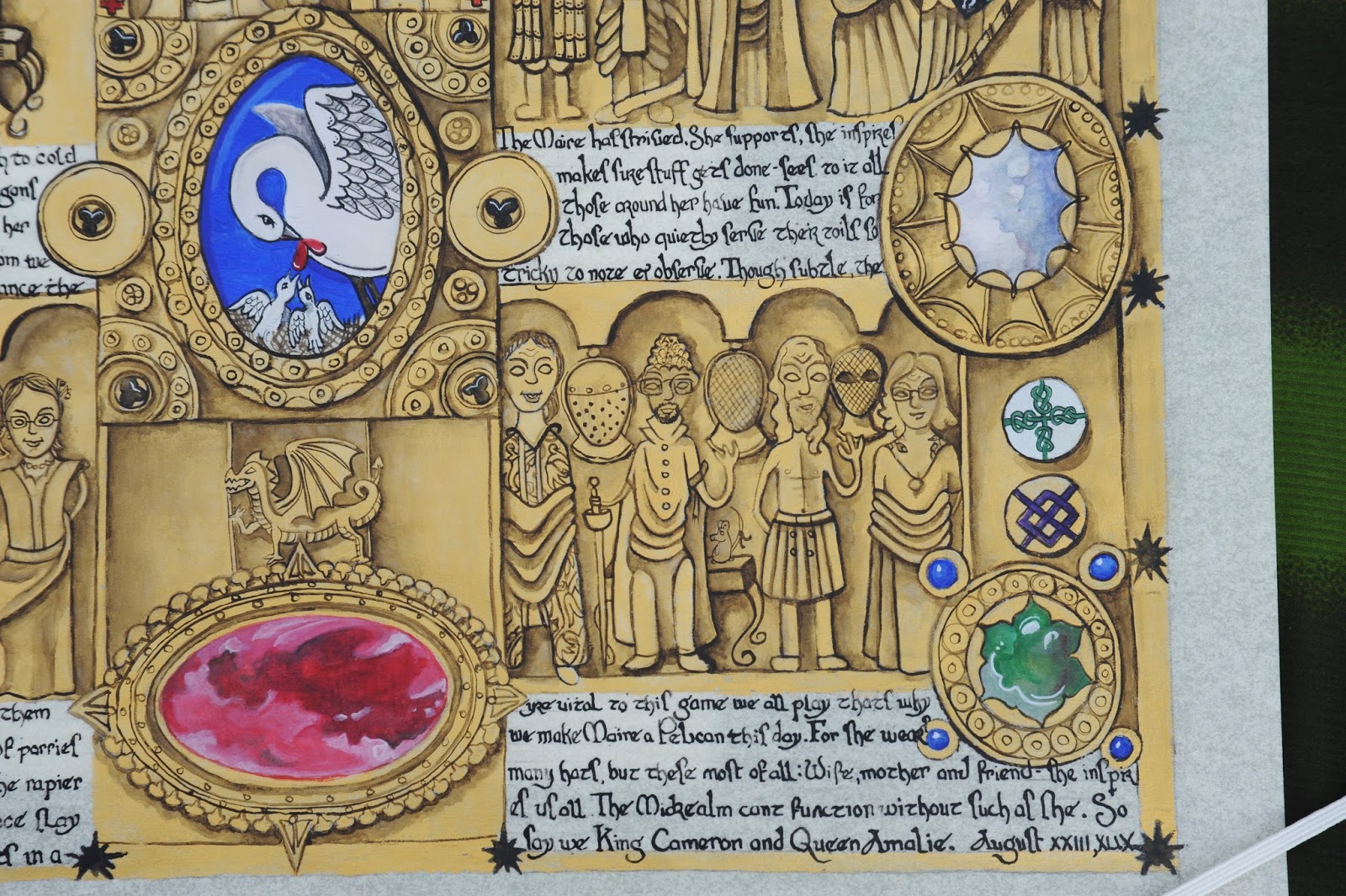 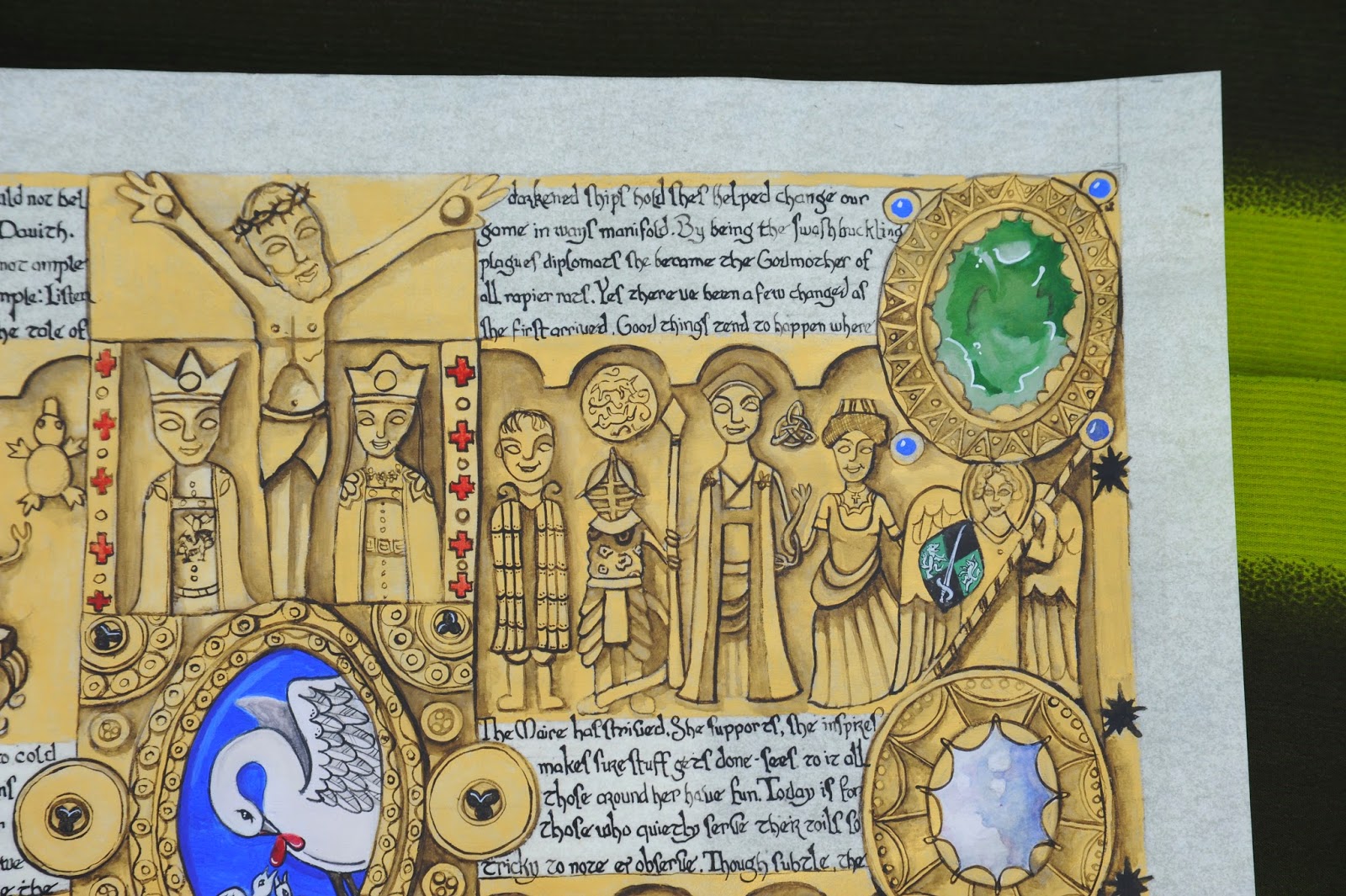 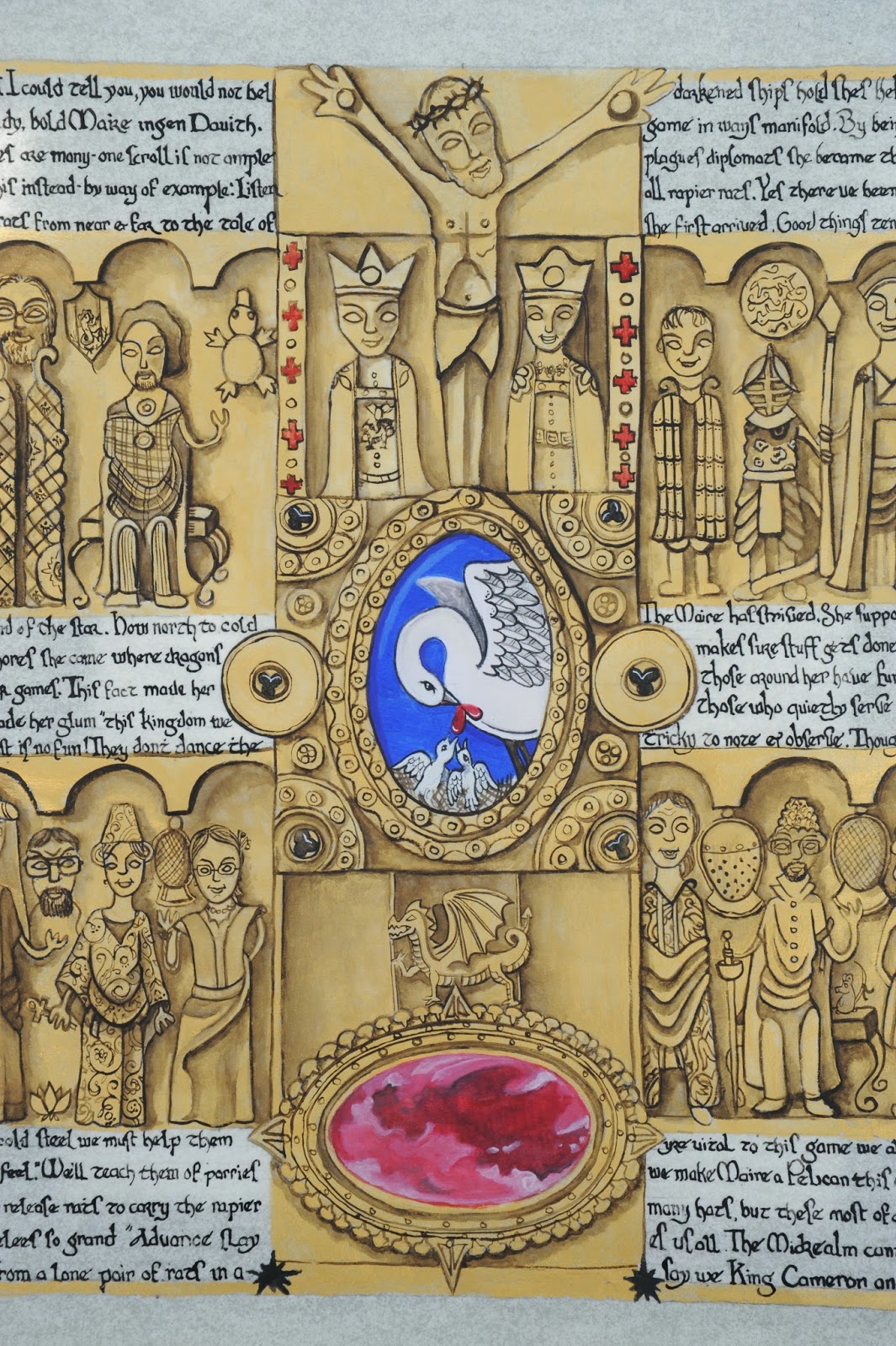 The Text was written by Master Cerian Cantwr and it reads as follows:


Oh, the things I could tell you, you would not believe
Of the lady, bold Maire ingen Dauith.
For her stories are many - one scroll is not ample.
So I'll say this instead - by way of example:

Listen good rapier rats from near and from far
To the tale of Maire, from the Land of the Star.
How north, to the cold Tre-Girt-Sea shores she came,
Where Dragons didn't play any rapier games.

This fact made her sad, this fact made her glum
"This kingdom we've come to, it just is no fun!
They don't dance the duello or prance with cold steel
We must help them to know of the joy that we feel."

From a lone pair of rats in a darkened ship's hold
She's helped change our game in ways manifold.
By being the Swashbuckling Plague's diplomats
She became the Godmother of all rapier rats.

Yes, there've been a few changed she first arrived,
Good things tend to happen where The Maire has strived.
She supports, she inspires, makes sure things get done -
Sees to it that all those around her have fun.

Today is for all those who quietly serve
Their toils so tricky to note and observe.
Though subtle, they're vital to this game we all play
That's why We make Maire a Pelican this day.

For she wears many hats, but these most of all:
Wife, mother, and friend - she inspires us all.
The Mid-Realm can't function without such as she
So say We, King Cameron and Queen Amalie.

Done this 23rd day of August, AS 49
while sitting on our thrones in our Shire of Swordcliff.