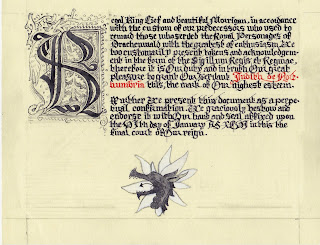 This is the most legible that I have ever gotten a hand of this style.  I was really pleased with it. The most intimidating part of this scroll was freehanding in ink the details on the Initial R.  I sat and just looked at it for some time before I actually put nib to paper.  I know there are some things that could be improved on but I was concerned if I worked it over anymore that I would spoil it. Once I get to that point its done.
Since I know the recipient fairly well I was all intimidated before it went out with the "Ohgodsihopeshelikesit..."  I was told there were tears, I did not see the tears but the collective gasp from the populace was most rewarding indeed.  This was done entirely in Iron Gall ink, with the exception of the Edelweiss which is lined in ink and painted in white guache.   I got both the Initial and the hand that I used from the Macclesfield Alphabet book, which has now become a staple of my Scroll Diet. :D
Posted by Saraswati at 6:46 AM