So I made two scrolls in an exchange of skills group called Medieval Barter Town.  I like it, it's lots of fun.  I've done some trading of my skill with a brush for some fun things both SCA and non SCA related. Since this blog is SCA related I will only post the scrollwork/art work that I've exchanged for other SCA related things.   Anyway in exchange for a new cloak for me (so my old one can be passed to my husband who is also in desperate need of a cloak...) I made 2 award scrolls for the Fight Back Tourney in honor of Baroness E'leri at Pennsic. 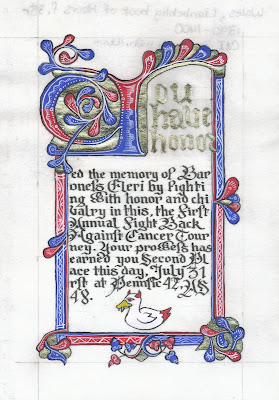 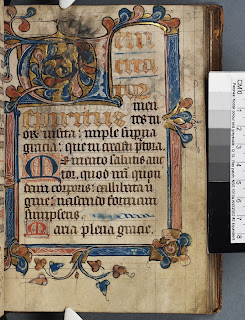 This is the Llanbeblig Book of Hours, f 35r Wales 1390-1400.  It was bloody hard to track down because of the website of the Library that this was found being in Welsh.  Great surprise eh?

The second scroll was for the best Death in their tournament and I decided that some slightly morbid but still humorous imagery would be in order. 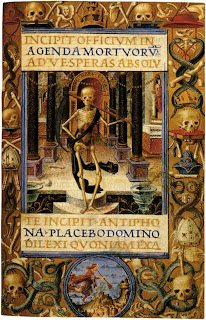 Mirandola hours, Italy,  ~1475.  I found the illumination to be refreshingly challenging, but it was the hand to which I was completely un-familliar that gave me the most problems.  I'd like to say I managed alright but I can see where the letters are unevenly sized or unevenly spaced, or worse yet...tilted the wrong way.
Posted by Saraswati at 7:25 PM