So I was involved in another Noblesse Largesse Exchange.  I can't tell you how much I enjoy the idea of creating something for someone else's persona.  I  havent gotten my pressie yet but i am eagerly awaiting it.

Now I must preface this with the fact that this was a research swap, where documentation was required.  Having never truly researched anything with any detail before I was a little intimidated.  As I knew nothing about Italy with the exception of it's gorgeous illuminated texts, I began where a scribe always begins...with the paintings.

I found three distinct portrait paintings or woodcuts featuring women with elaborately decorated flag fans.  And in later research (though I cannot now find where this came from) I came across this quote from Crudities.  " These fannes both men and women of the country doe carry to coole themselves withall in the time of heate, by the often fanning of their faces. Most of them are very elegant and pretty things. For whereas the fanne consisteth of a painted peece of paper and a wooden handle; the paper which is fastened into the top is on both sides most curiously adorned with excellent pictures, either of amorous things tending to dalliance, having some witty Italian verses or fine emblemes written under them; or of some notable Italian City with a briefe description thereof added there unto."

The first, and my primary inspiration was a piece called Portrait of a Lady in White , painted in Venice by Tiziano Vecellio who was also called Titian.  I wanted a portrait in which the fan was featured, merely to ease my mind to the fact that they were used in period if only for decoration.

The second piece was Giacomo Franco's Habiti delle donne venetiane (Costumes of Venetian Women, picture 2)  and is dated to 1550-1620.  This one clearly showed the paintings and detailed paintings on the surface of the fan that were refrerenced by Crudities. 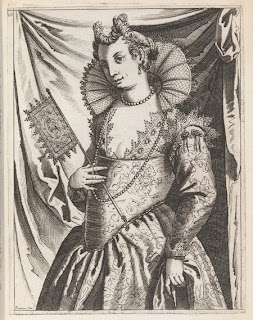 The third and final piece of inspiration, came from Hans Weigels Habitus Praecipuorum Populorum...das ist Trachtenbuch (The Trachtenbuch Illistrations, picture 3) circa 1577, Plate 118 and is entitled a Venetian Dogaressa. 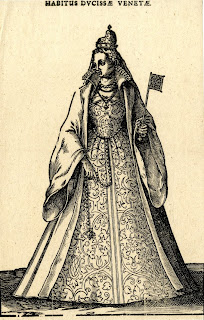 The extant pieces that I could find had an astonishing variety of mediums they were created in, from a woven thread creation in the Bayerische National Museum, to intricately cut parchment and vegetable fibre that was then hardened most likely with fish glue like those in the Marselleti collection in Venice. 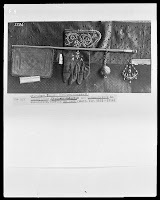 I decided that I would do a combination of the styles, giving me the change to illuminate 2 pieces of parchment and glue them together atop a sheet of lacecut perg to mimic the style found in the Habiti delle donne venetiane.  Now, ideally this would have been done with thread but my skills do not allow such things, so I cut the lacework instead. The illuminations themselves are from the Bible of Borso D'Este, Italy 1470 which is one of the most beautiful manuscripts i've ever had the pleasure of working from.  The wording upon the one side reads A servioso del Sogno (In service to the Dream).  This side also includes the Arms of Calontir and the Laurel wreath. Her own personal arms form the centerpoint of the other side's Illumination   This I would then glue (with modern glue because fish glue=stinky) between two carved halfdowels that I had stained and coated with sealant, finished with a beaded knob at the bottom.  In the pictures the top of the fan has a beaded knob as well.  I changed that at the last possible minute to an o screw with a pearl dangle later on when I decided I didn't like how it looked.  The O screw will allow the recipient to hang whatever it is that she wants from the top of her fan. 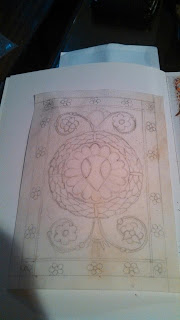 The In Between Stages: 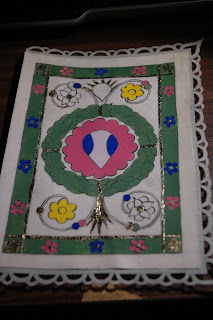 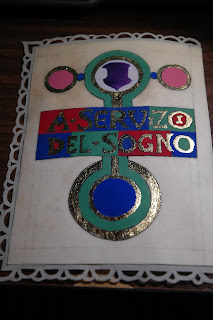 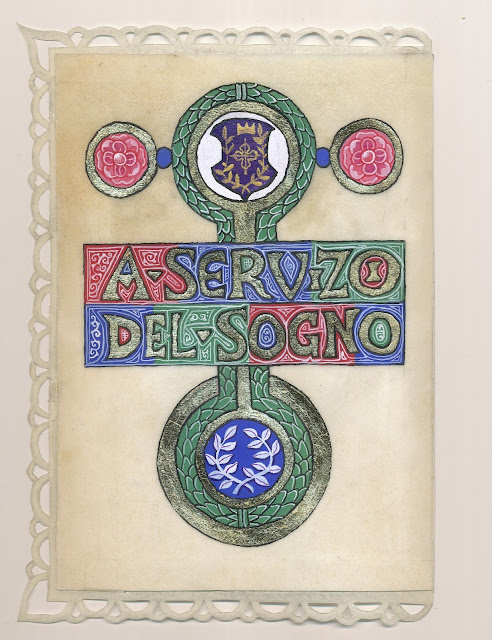 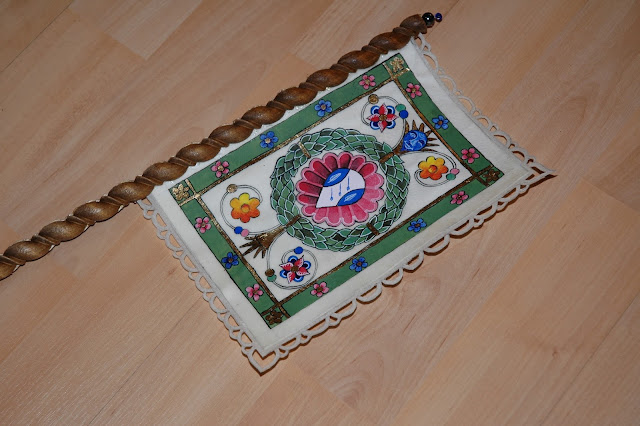 Posted by Saraswati at 1:20 PM