This one has been sitting in my NOT YET GIVEN folder for a while now.  It is a Baronial Award for Ayreton called the Order of Ríáin Star.

Inspired by a Japanese Kasuga Deer Mandala from the 15th century that I found in the Online gallery of the Art Institute in Chicago.  Their online gallery is quite extensive and I recommend a look if you've never gone through it.  It's worth it. The original is Ink on Silk and is just Exquisite.

Now, for this one I did translate each and every word in Google Translate from English to Japanese.  I know that the context and syntax will be wrong for some of the words, but as I do not speak or write Japanese with any fluency I thought I managed fairly well. I will find the English transcription here shortly. 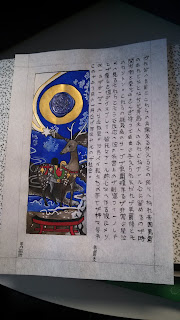 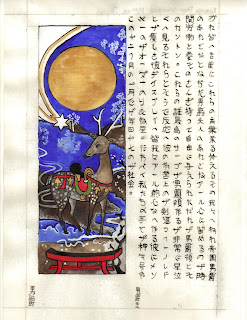 With and without the Seal of Ayreton.  I sealed it myself, so there was no confusion about where it was supposed to be.  I wanted it there.  :D


TRANSLATION: Unto all to whom these words come know that we Henry, Imperial Baron of Ayreton, and Nadezda, Imperial Baroness of Ayreton, are mindful of the time, labor and love that Kinji has most freely given unto the Barony and its cantons. These who best serve the Barony make the very stars weep to see them, and so in responce to his honor upon the fencing field and the graciousness he displays to all, we are minded to make him a Companion of the Order of Riain’s Star. Done by our hands by the gods direction this 12th day of January , in the year 47 of the society.


Now this has aged, but I don't think I matched the colors as precisely as I could have.  Perhaps next time I'll try painting with watered down ink and see how that works, since that is what they would have done.  /shrug
Posted by Saraswati at 9:36 PM