So I got a position in the last Nobelesse Largesse Exchange which is a Knowne Worlde A&S Secret Swap.  I recieved a beautiful silk banner painted with water patterns and lotusblossoms.  PERFECT for my persona.

I recieved a Welsh Crusader as a recipient.  Now I knew next to nothing about the crusades, so I hit the books.  Knights of the Crusades was one such book as well as Wales and the Crusades by Kathryn Hurlock.

I found a wealth of information that was interesting to me making something small for a crusader including: that crusaders were given a cross upon their swearing their entry into the crusaders and that they often wore garnet for divine protection against wounding.

I found a tiny picture of an 11th century pilgrims pouch and looking at it something went 'ping' inside my head.  I would make for him a rosary to be held in his pilgrims pouch.   Now rosaries were traditionally bone and wooden beads for the poorer person, with red coral and pearl beads being for the more fashionable. They could even get elaborately guilded beads in there as well if you had lots of money and wished your piety to be seen and spoken of.  Usually they were loops of up to 150 beads with a cross on the end, but males much more commonly had straight rosaries of 10 or 20 beads with either 2 fancy Gaud beads at either end of the 10 ave beads, OR 1 fancy Gaud at one end for a Paternoster bead and a Tassel at the other end for the other paternoster bead.  These rosaries were traditionally bound in red silk thread, to honor the blood of christ.

It coalesced into this. 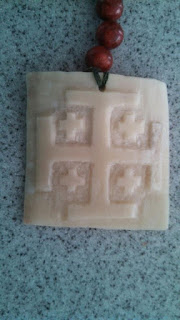 One, Crusaders Cross Gaud- hand cut from a fresh slaughtered, hand treated/steralized bovine femur.  Then handcarved and shaped.   It was then attached to a tenner of red coral beads, and a handwound tassel.  The recipients colors were Green and yellow, so I decided to use emerald thread instead of scarlet to reflect the recipient. 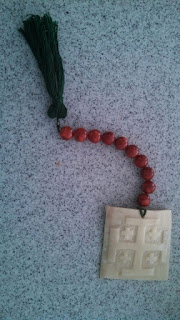 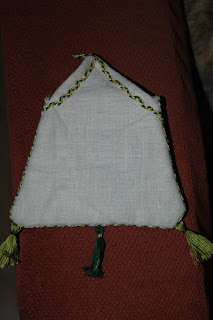 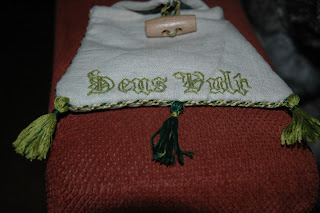 Handsewn linen bag, lined unfortunately with emerald green corderoy.  I didn't have anything else that was emerald green and I could not at that moment afford to purchase new fabric for such a small project.   The embroidery was done in a simple split stitch (which is all the embroidery that I have ever mastered) and reads Deus Vult, "God wills it!"
The braiding is embroidery floss, a 4 strand braid that was mainly decorative to cover the seam lines.  3 handwound tassels complete it.  If I had to do this again I would make the tassels floofier, use more floss in order to make them thicker. 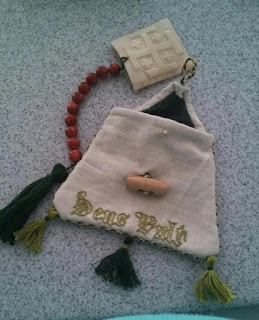 Posted by Saraswati at 1:24 PM