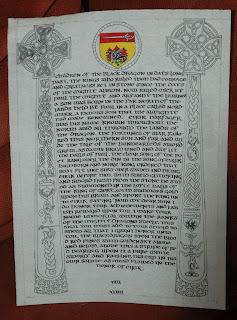 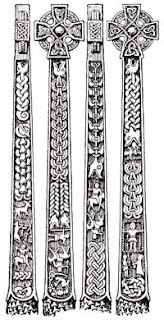 This is a scroll based on the Gosforth cross, an anglo saxon cross in St. Marys Churchyard in Gosforth Cumbria England.  It is dated to about 920, and tells the tale of Norse gods, including imagery of Loki, Sigyn. Heimdahllr, Thor, and Víðarr carved from red sandstone.   I replaced the tales of the Gods, with imagery from the tales told me of Viscount Eirik.

I fought with it for a long time, trying to figure out if I should leave it in black and white or if I should put color in it.  I know that a lot of viking carved edifaces had color in them, were enamelled or painted brightly.  If anything I think that the color only in the Dragon's Steel Mark at the top, just makes it artistically stronger.

The text was written in the lyric style of Beowulf, in stanzas.  Which made it seem all the more appropriate when I heard it was given on the field.  That made me smile.

The words are as follows:


Children of the black dragon in days long past
the kings who ruled them
Had courage and greatness
set in stone since the days of the Mighty Albion
Now ruled by Paul the Mighty and Aryanhwy the learned.
A son was born in the far north of the lands held by paul
in a place called Nordmark.
A famous son that the Almighty had made renowned
Eirik Harfager was his name known throught the north
and all through the lands of the dragon
The fortunes of war favored this northern son
and far and wide the tale of the lionhearteds sword grew

As dawn brightened and day lit the halls of Paul
The clear song of the poet
Rang out over the din, in the song of Eirik.
Highborn and noble king ordered that boat fly
like a bird over the waves and bring Eirik before him
With shield gilttering and sword fresh off the stone he stood
summoned int he lofty halls of the king of glory
With summers gold upon his brow
And this spoke the king unto Eirik

And raising his cup in his own salute
As mead flowed in the honor of Eirik.
Posted by Saraswati at 9:10 AM